This will contain spoilers for The Clone Wars

CC-1010, known as Fox, was the Commander of the Coruscant Guard. Known for his fierce loyalty, Fox became one of the most highly decorated soldiers in the Republic Military. In his role, Fox led the arrest of Ziro the Hutt (and rescue of Padmé Amidala), and was also a key member of the hunts for both Ahsoka Tano and Fives when they were declared fugitives, being the one to kill Fives after he refused to stand down. At the end of the war, Fox led his unit in the implementation of Order 66 across Coruscant and continued his role in the early days of the Empire, until he was executed by Darth Vader after some of his soldiers saw the Sith’s lightsaber and opened fire, believing him to be a Jedi. 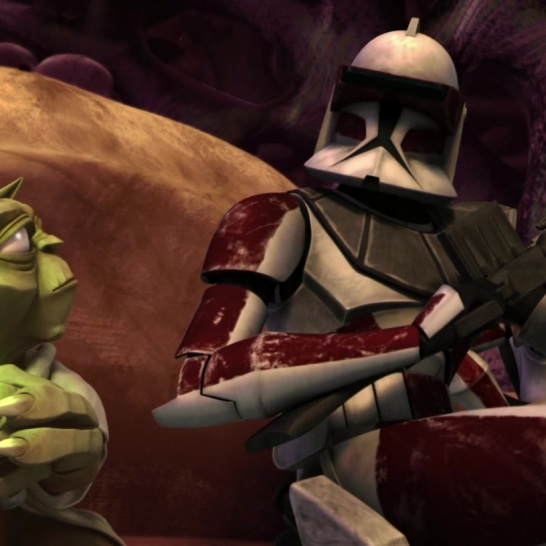 CC-4477 was a shock trooper in the Coruscant Guard. In the early phase of the Clone Wars, he was a lieutenant in the diplomatic service, during which time he accompanied the Jedi Master Yoda to Rugosa on a mission to form an alliance between the Toydarian king Katuunko and the Republic. When the diplomatic force was ambushed in orbit by Separatist forces, Thire and 2 clones from his unit joined Yoda in an escape pod down to the planet’s surface to ensure the Jedi made it to the agreed negotiations. While Thire and his men succeeded in their mission, he was injured during combat with Separatist ground forces. By the time the Clone Wars reached their end, Thire had been promoted to commander and put in charge of the detachment that guarded the Senate Building. After taking part in Order 66, Thire was one of the clones who tried finding Yoda after the Jedi fled from his duel with Emperor Palpatine. Thire then led the unit of troopers who accompanied Palpatine to Mustafar to retrieve Darth Vader following is duel with Obi-Wan Kenobi.

CC-5869, Stone, was a commander in the diplomatic service of the Coruscant Guard. Following Hondo Ohnaka’s capture of Count Dooku, Stone was sent to lead a unit accompanying Senator Kharrus and Junior Representative Jar Jar Binks to negotiate the ransom for Dooku and—unbeknownst to them—also Anakin Skywalker and Obi-Wan Kenobi. When a group of rogue pirates attacked them and caused their ship to crash land, leading to the death of Senator Kharrus, Stone stuck to the protocols (which meant that Binks was in charge rather than him) despite the unease of his troops. However he did cleverly steer Binks’ actions, leading to the Gungan’s clumsiness allowing the clones to defeat the rogue pirates and arrive at Ohnaka’s base heavily armed and looking for a fight, which conveniently saved Skywalker and Kenobi from being recaptured.

A clone commander in the diplomatic service, Thorn led the garrison who accompanied Senator Padmé Amidala to Scipio. When Separatist forces began the Invasion of Scipio, Thorn and his garrison were caught unawares in an exposed position, resulting in his garrison’s gunships and cruiser being destroyed before they could leave the ground and what troopers remained unable to reach Amidala. Thorn sent a warning to Amidala and led his remaining troops in a last stand outside the Banking Clan’s Main Vault, eventually being the last trooper standing before being killed in action.

An Advanced Recon Force Scout Trooper, Hound served as a sergeant in the Coruscant Guard, where he worked with Grizzer, his massiff, as a tracker. Hound and Grizzer were involved in the Hunt for Ahsoka Tano after she escaped custody.

A pilot within the diplomatic service, Mack was one of the pilots for Senator Kharrus’ ransom mission to Florrum. When their ship came under attack from a rogue section of the Ohnaka gang, they were eventually shot down. Mack was killed in the crash, along with his fellow pilot and Senator Kharrus.

A shock trooper within the diplomatic service early in the Clone War, Rys was a member of Lieutenant Thire’s unit that accompanied Yoda to Rugosa for negotiations with King Katuunko. When their ship was ambushed in orbit, Rys was one of the clones who accompanied Thire and Yoda to the moon’s surface in an escape pod. Once on the ground, Rys helped protect Yoda from Separatist ground forces that heavily outnumbered them, allowing him to reach his agreed rendezvous with King Katuunko and ally Toydaria with the Republic.

A shock trooper within the diplomatic service early in the Clone War, Rys was the other member of Lieutenant Thire’s unit who accompanied Yoda, Thire and Rys to the surface of Rugosa and to his negotiation with King Katuunko. Following this mission, Jek retrained as a scout trooper and worked his way up to the rank of Captain within the Ranger Corps by the end of the Clone War. In this role, Jek was reunited with Yoda in the defense of Kashyyyk. While he overlooked the battle from the command post alongside Yoda, Gree, Wookiee Chieftain General Tarfful and his lieutenant Chewbacca, the clones received Order 66. Jek joined Gree in attempting to kill Yoda, however they were both decapitated by the Jedi master.