Welcome to Book Reviews. In this series I will look to review any canon books that come out in the Star Wars galaxy. I am no expert in book critic or expert in writing (as you may be able to tell), so this is very much from a fan’s point of view. I will generally try to give a quick idea of what the story is about but avoid any spoilers. In each review, I will also try to point out a few “Moments in Canon” – moments that link into the wider canon and references to other canon stories – and also give my opinion if it is worth reading. Today I will be looking From A Certain Point Of View. 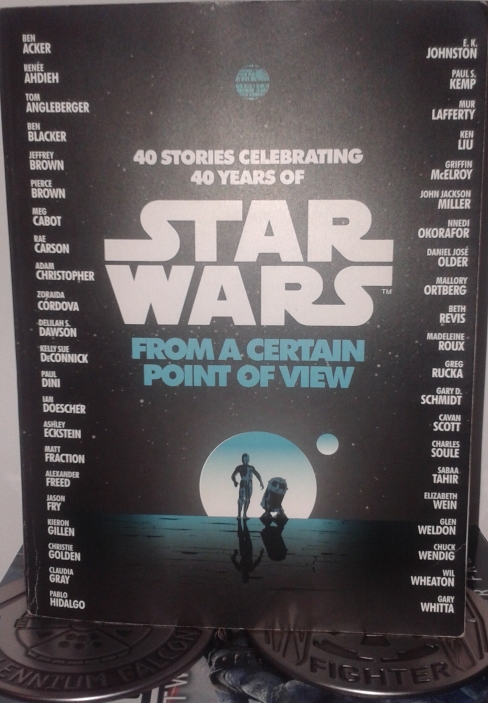 This story, with the magic and the fire swords and the crouching woman and the planet-sized ship—it was happening right now.

So this review is going to be a little different to my other ones just because of the nature of the book. All the other books that I have read have been one long story, however From A Certain Point of View is instead a collection of 40 short stories by different authors that has been made to celebrate the 40th anniversary of the release of A New Hope and the beginning of a fandom that will conquer the galaxy more successful than the Empire did. All 40 stories are set during the timeline of A New Hope and each one follows a character and shows how their story intertwines with the narrative we know from the movie.

I really enjoyed this book! We are given such a range of stories, some showing certain events from the point of view of one of the film’s tertiary characters, some showing characters and events that we never even see onscreen, creating a great reminder that every character has their own story, even if they’re not going to become famous.

He believed R2-D2 was on an important mission. He believed the droid was out to save the galaxy. And something inside him—an imprint, a phantom memory, something as old and stubborn as the stars—insisted that he help. Because the cause of the Rebellion was his mission, too.

With each story having a different author, there is such a range in characters covered and writing styles – we get one that is shown through a mouse droid’s internal processing, another that is merely a picture and even one that is written in Shakesperean-esque verse! – which means that while not every story will necessarily grab you, the chances are very high that there will be other stories you really love.

Watching #ANewHope after having read From A Certain Point Of View gives so much more to some of the minor character… twitter.com/i/web/status/1…

We see famous moments like Han killing Greedo (left ambiguous as to who shot first), the destruction of Alderaan and the Battle of Yavin from a number of different perspectives, which is a great way to show how the events were perceived by characters other than the main heroes and villains. The one issue that multiple perspectives on the same events can have is that there are sometimes discrepancies in details which could cause confusion, but when this happens in this novel I find that the idea of an unreliable narrator can explain away this issue – for example Biggs may not realise Evaan Verlaine is still alive in the Battle of Yavin when he thinks that it is just him, Luke and wedge left – which I think could be given some credence by Muftak mistaking Luke for a teenage girl throughout the story “The Kloo Horn Cantina Caper”.

I really enjoyed how this book brought a number of newer characters into the canon of the Original Trilogy films – from Chelli Aphra (from the Darth Vader and Doctor Aphra comics) being on Dantooine when Imperial scouts come to find the Rebel base to Miara Larte (from E. K. Johnston’s novel Ahsoka) being at the medal ceremony following the Battle of Yavin – while also finding in-universe reasons for some plot holes and easter eggs that have become famous over the years – the stormtrooper hitting his head on the door and Fake Wedge now being made into his own character are probably 2 of the more notable ones.

You would not betray her. Your spirit was shaken, and your loyalty changed. Your silence made you her ally. You were now as doomed as she was. You would never betray her.

You had joined her rebellion.

While I loved the majority of the stories, I wanted to give a quick mention to some of my favourites from the book:

My name is Obi-Wan Kenobi, and I am dead.

Personally, I really enjoyed the book and think that it could be a great jumping on point for people who have not really read much in the Star Wars canon as they may find characters they are drawn to or even certain authors that they want to read more from. I really hope that it becomes a tradition to release the same style of book for the other movies as we reach the 40 year anniversary of the other movies.

We’re alone. Our squadron gone. Out of thirty ships, only three of us remain, and the Death Star is drawing around Yavin, mere seconds left before it can fire down at the moon and obliterate the Rebellion as it obliterated Alderaan. We are the last hope.

Have you read this book? What were your thoughts on it? Thanks for reading and May the Force be with you…