I’m back with another episode review for Star Wars Resistance. This is the second and final season of the third animated show in canon, focusing on Kazuda Xiono and his friends on the Colossus as they attempt to get away from the First Order and find the Resistance. These will take a very similar format to previously: an overview of the plot (so it goes without saying, there will be spoilers!), my thoughts on the episode and a few Moments in Canon – things I picked up on that linked to other stories or the larger galaxy as a whole. Today, I will be looking at episode 10: “Kaz’s Curse”

Kaz is gambling against Leoz with Neeku, CB-23, Synara and many of the Warbirds pirate gang looking on. Despite Kaz having never played the game before, he is having incredible luck and winning every time. As the pirates begin to lose their temper, Kaz decides to call it a day, but Leoz jumps on the table and “curses” Kaz.

Kaz is initially unbelieving of the curse, but things begin to go wrong immediately – Kaz knocks a drink over one of the pirates, nearby lights short circuit, a marketplace stall runs out of stew as they get there and Kaz almost has a hoversled full of crates fall on him – much to Neeku’s alarm.

Kaz is called to the hangar along with Torra and Hype. Yeager explains that they deep in the Guavian Death Gang’s territory so will be taking a shortcut through an asteroid field to get away as soon as possible. Yeager tells the 3 of them to scout ahead to look out for Guavian patrols and take out any Guavians before they can call for backup.

“Please do not joke around with curses, Kaz. They might be contagious.”

While the Colossus begins to blast its way through the asteroid belt, the 3 fly out ahead. Kaz begins having some issues with the Fireball, culminating in his seat squishing him against the canopy of his cockpit. Kaz is spotted by a Guavian scout and tries to give chase while contacting Torra and Hype for help, he manages to lower his seat but the scout gets away as a handle breaks off in Kaz’s hand. The trio return to the Colossus, with Kaz having issues landing and getting out of the Fireball. Kaz informs a hologram of Doza that a scout got away, leaving Doza unhappy that they will have been brought to the attention of one of the most powerful gangs in the galaxy. As they are in the middle of the asteroid field, Yeager says that their only option is to continue on their current course.

Kaz finds Leoz and asks him to remove the curse, but Leoz instead “curses” him again. Kaz goes to speak with Mika Grey and ask for help. She says that it is having an effect on him as he is believing in the curse more than what he will even admit to himself, before giving him a wooden talisman to act as a lucky charm and defence against the curse. As she is talking with Kaz, a group of Guavian ships arrive and begin to attack the Colossus.

The leader of the Guavian forces demands the surrender of the Colossus or a toll of 1 million credits, both of which are rejected by Doza. The leader threatens to turn them all over to the First Order. As the Colossus can’t jump to hyperspace until they have cleared the asteroid field, Doza scrambles the Aces. Kaz rushes to the hangar to join the dogfight but does not realise that he has dropped his new talisman as he climbs into the Fireball.

“Oh, now you believe in curses too? Great!”

The Aces lead the Guavians away from the Colossus and Kaz lines up a shot on one of the ships, but the laser cannon jams, leading Kaz to realise that he is missing his talisman. Kaz calms himself and tells himself that there is no curse. He manages to fire at a nearby asteroid, the debris of which destroys one of the pursuing ships and gives Kaz his confidence back. The Aces get the upper hand against the Guavians using Kaz’s advice to use the asteroids and their greater maneuverability to their advantage. The Aces take out most of the Guavians before returning to the hangars for the Colossus to jump to hyperspace as soon as they clear the asteroids.

Neeku gives Kaz back his talisman, which he found on the hangar floor and tells Kaz that he believes that Kaz is no longer cursed. Kaz gets his own back on Leoz by giving him the talisman and telling him that it’s curse, causing Leoz to panic. Speaking to Mika Grey, Kaz admits that he realises the curse was all in his head and she watches him walk away, commenting to a gorg about how suspicious the pilots are.

After a couple of episodes that left me really questioning the show, seeing the synopsis “After a pirate places a curse on Kaz, matters become worse when the Colossus enters Guavian Death Space” made me steel myself for an absolutely terrible episode, so I must admit that I was left pleasantly surprised.

While I will say straight away that the side story of Bolza Grool’s superstitious nature did not work for me, I think that the main storylines of Kaz’s curse and the traversing through Guavian space were good, though I think that the balance would have worked better if the curse had been the secondary plot to provide some colour to the main story. I do however I understand that as a kid’s show, kids would have probably enjoyed the curse story.

It’s probably no surprise to regular readers that my favourite part of the episode was everything in the asteroid field. It was nice to see the improvement in the Aces as combat pilots, while Kaz came into his own once he put the curse behind him and was able to show his quality as a combat pilot and also advise the Aces how to get the upper hand – a tactic that made perfect sense considering that these pilots are racers first and foremost so are used to having to be very precise in their flying. From a tactical standpoint as well, I also really appreciated seeing 3 Aces sent out as scouts while the rest stayed with the Colossus, much safer than taking all of the station’s defenders and leadership to a casino last week.

I’ve really enjoyed seeing the Guavian Death Gang feature in Resistance following their appearance in The Force Awakens as they look cool and are instantly recognisable, but they are pretty much a blank slate as they have had minimal appearances so far int he canon, so we get to learn more about them, while their armour and ships all having the same appearance probably helps keep the costs down as they need to create less assets for the show. I do wish that there had been a bit more of connect to The Force Awakens by having Bala-Tik as the Guavian demanding the Colossus‘ surrender, however I understand that this was probably to reduce costs having to create a different character model and either bring in Brian Vernel or someone who can imitate his voice.

It was great to see the pirates have a larger role again at the start of this episode and I thought they were used very well, while it was great to see Leoz given a bit more character in this episode. However, I do feel that as we expand on so many of these side-characters this season, Synara is being relegated to a largely tertiary role, which is a disappointment as I enjoyed her character a lot in the first season.

Going forward, it will be very interesting to see what impact this episode has. It’s clear that the Aces are improving as a combat unit, so I would love to see them have some success against the First Order soon. Considering the Guavians threatened to hand them over to the First Order, will the First Order now be hot on the Colossus’ tail again after being given a tip-off by the Guavians? Only time will tell…

“These pilots are a curious bunch. Superstitious lot, aren’t they?” 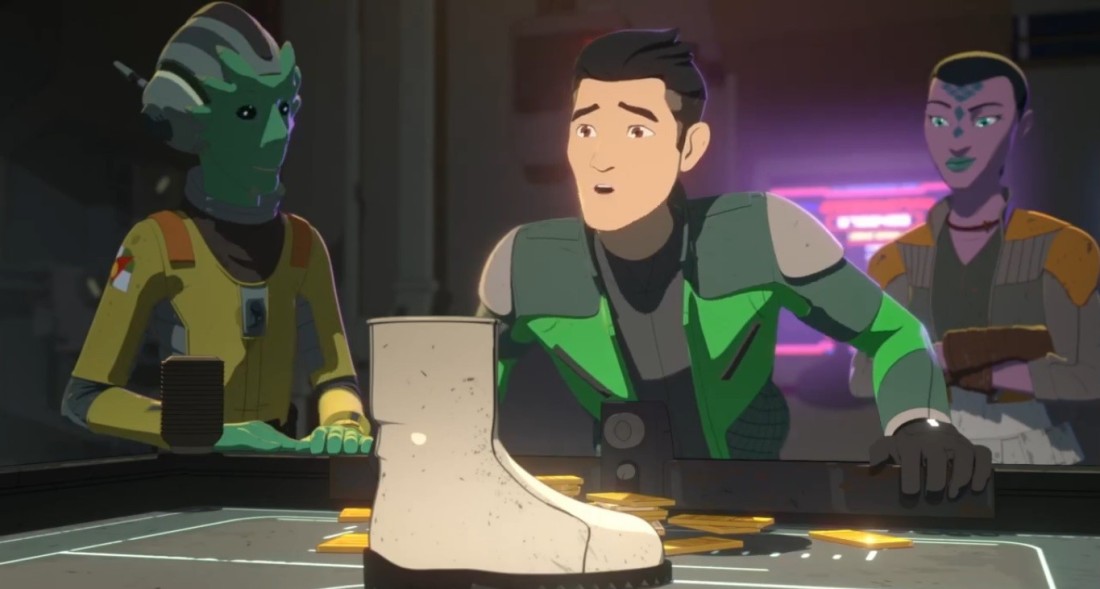 What did you think about the episode?