Where has this year gone?! It’s hard to believe that we’re already into December, but we really are into the final stretch of 2022, and with that comes something that I have been looking forward to for months: time to open the new LEGO Star Wars advent calendar. Last year was my first ever time getting the calendar, as one of my friends bought it for me, and I absolutely loved it, so had to get this year’s!

But rather than keep it to myself, I thought that this year it would be fun to chart this month’s gifts with you. So each day, I will be showing you the minikit that was behind that day’s door, allowing you to decide if the calendar is something you would consider purchasing in the future, but I will also then give a few details about the ship/item/character the kit is of.

So… let’s get going!

Day 14 has given us a minikit of a B-wing. A single-pilot bomber designed for busting blockades, the B-wing was slower and less manoeuvrable than a Y-wing, but came with weaponry that one would usually expect to find on much larger ships. The B-wing was utilised by by the Rebellion and New Republic, having evolved from a prototype called the B6, which was created by the Mon Calamari engineer Quarrie. The B-wing was also noticeable for it’s gyro-stabilized cockpit, which allowed a pilot to keep a level horizon while the rest of the ship rotated around them. The most notable B-wing squadron in the Rebellion was Blade Squadron, who fought at the battles of Endor, Malastare, Kuat and Jakku. Alphabet Squadron—a 5-ship squadron that saw each pilot make use of a different starfighter model—included a B-wing, flown by Chass na Chadic. 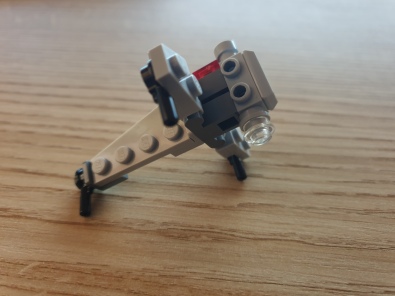 What do you think of the minikit, and the advent calendar in general?

You can find all the details on my announcement here.