Welcome to my new series “Squadrons Revisited”. A couple of years ago, I did something similar with Star Wars Battlefront II, running through each mission in the story. In that game, we were introduced to a new military unit in Inferno Squad, well now I’m back looking at Squadrons, which also introduces two new units in the Imperial pilots of Titan Squadron and the New Republic pilots of Vanguard Squadron.

Why am I doing this? Well first of all, it’s a canon story that could easily overlooked, due to just being on a video game. But it is also a fun chance to look back at a game itself, and potentially some of you who read this may decide to try the game for yourselves. I will warn you though, there will be spoilers for the story.

Each article will cover a mission in the game, I’ll talk through any cutscenes and conversations that we can have, talk through how the mission basically plays out (including my thoughts on the gameplay and highlighting some achievements available and the “medals” you can earn on each mission—this will be my second playthrough, having smashed through the story in a couple of sittings when the game first came out but then not really touched the game much since) and finishing each article (if I picked anything out) with something you may be used to from my reviews: “Moments in canon”, anything that I have picked out that can tie into other stories within the Star Wars universe.

Today, with the Prologue now completed, we will be beginning the main body of the story with the mission Form the Vanguard

With the prologue now over, we jump forward 4 years to shortly after the Battle of Endor, and similar to how the prologue opened, we now get a cutscene of a speech from Princess Leia. Leia praises the bravery of the Rebel pilots and states that their work helped end Palpatine’s reign and bring about the New Republic. Leia admits that the Empire is still currently living on in a shattered form, with Imperial forces currently heading towards the Bormea Sector. Leia ends the speech with one final rousing call to fly with the New Republic and change the galaxy for the better.

And so, we finally get to meet the rest of Vanguard Squadron, who are now part of the New Republic, with the Rebellion no more: 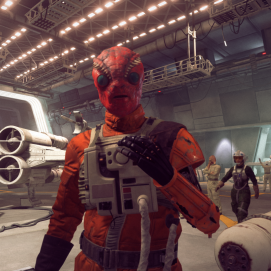 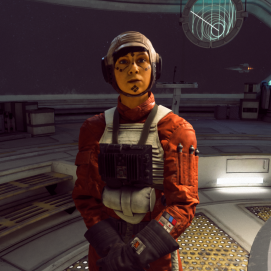 We meet Vanguard’s 4 pilots returning to a fleet led by the cruiser Temperance. Arriving back with the fleet they report some long-range communication issues, apparently the 3ʳᵈ patrol to do so. As the group banter amongst each other, they all quieten down to hear the message from the new boss of the Temperance, Lindon Javes. Javes talks about how he is honoured to take command of the fleet and praises the work of Vanguard squadron, before announcing that the group has been reassigned to a secret initiative called Project Starhawk. The pilots make their way back to the Temperance‘s hangar, discussing what the initiative could be. Our hero in this story, Tavana Trace, is already in the hangar, where she meets Zerelda Sage, the chief mechanic for Vanguard. Zerelda welcomes her, before calling over Gunny, who introduces herself and welcomes her, aware that she is coming in to fill the Squadron as Vanguard 5. As Gunny makes her way to the briefing room, Zerelda hopes that Tavana can live up to one of the best outfits in the New Republic.

Tavana makes her way into the briefing room, where she is welcomed by Javes, who introduces her to Ardo Baradai, who is part of fleet intelligence. From the discussion Javes has with Trace and Ardo (or should I say, the conversation that Javes and Ardo have at her—our characters get no lines in the games, except for a few basic and generic lines as we make tactical calls in flight, which is very disappointing), we find out that Tavana had been posted to Chandrila, but Javes had requested her personally as he knows how good a pilot she is and he needs people that he can trust.

And so we get into the briefing for Trace’s first mission as part of Vanguard. Javes is worried that the apparent communications blackouts are a prelude to an Imperial invasion. Another squad had been sent to look into the communications issues, but they have disappeared. And so Vanguard is splitting into 2 for this mission: Grace leading Tavana and Frisk to look for the missing squadron in the Brentaal system, before rejoining with Gunny and Keo over the planet Cavas, where Javes believes they are most likely to find Imperial jamming ships.

Before leaving the briefing room, we have a chance to chat to Keo and Grace. We find out that Keo used to be a semi-pro racer before joining the Rebellion, and she thinks that Tavana will fit in well. Even more of a shock background comes from Grace, who is an estranged member of the Sienar family, who make the Empire’s TIE fighters. Making out way back to the hangar, we can speak to Frisk and Gunny. Gunny gives Tavana a proper welcome to the team, and notes how the communications blackout is very similar to how the Imperial invasion of Mimban began, before warning us to stick with our squadron when on a mission. The chat with Frisk is a fun one though, as we find out his background, having previously hunted for trophies and antiques, until he mistakenly got hold of a painting (which he didn’t realise was fake) for an Imperial Governor, who showed the art to Grand Admiral Thrawn, leading to the governor putting a death mark on Frisk, which led him to the Rebellion. Frisk then invites us to a game of sabacc, saying that he is just learning the game but would love to try playing us for credits… I’m no sure I quite buy his story, and thankfully we don’t take him up on the offer, instead going to Zerelda, who has prepared our T-65B X-wing. W continue to watch on from our cockpit as Tavana goes through pre-flight checks and her astromech droid is installed, and then it is time to take off and begin our first mission.

Having left the hangar, the whole 5-man squadron flies in formation through the fleet to our set jump points. Gunny and Keo jump away, and the rest of us form up and make our own jump. Arriving in the Brentaal system with Grace (X-wing) and Frisk (Y-wing), there’s no initial sign of the missing scouts, but Grace soon picks up a signal and we start to follow it, but Grace is unable to contact the Temperance to update them on the situation. After a while, we eventually find the scout ships… or at least their remains. As Trace scans them, Frisk picks up a second signal and we make our way towards it, but as we get closer, Frisk realises that it is an Imperial signal. A Gozanti-class cruiser jumps into the area and releases its squadron of TIEs to attack us. But despite the numerical advantage, they are no match for our elite pilots, and our trio quickly takes them out and destroys the cruiser. Grace comes up with a clever plan to have Tavana scan the remains of the cruiser to see if we can use the trajectory they came from to work out where the Imperial forces are. The plan works, directing us to the same co-ordinates that Gunny and Keo were going to. We rush to a nearby jump point and make the jump to lightspeed, hoping that we can catch any Imperial forces by surprise.

We jump in and find ourselves met by 2 Imperial IGV-55 surveillance vessels and their escort of 6 TIE fighters. With Grace’s help, we make short work of the TIEs before helping Frisk as he attacks the surveillance vessels. With those vessels destroyed, we are able to contact Gunny, who reports that she and Keo are under attack and need assistance. We jump in nearby and take the TIEs attacking Gunny (Y-wing) and Keo (A-wing) by surprise, quickly turning the battle in Vanguard’s favour. Another Gozanti-class cruiser jumps into the system and drops off its complement of TIEs before making a hasty retreat, but 4 more TIEs makes very little difference against the full might of Vanguard. With Gunny and Keo now safe, we make our way as a squadron towards the remaining Imperial forces: an Arquitens-class command cruiser, two more Imperial jammer ships, and their TIE fighter escort. Gunny advises that we stick together and focus on the jammers first.

And herein comes the first time that replayability becomes a factor in the game, as we need to complete this mission at least twice for 100% completion, with one of the medals on the mission for following the agreed plan and taking out the jammers first, while an achievement is available for taking out the command cruiser first. Whichever decision you make, the rest of the squadron will support you, especially helpful are Gunny’s resupples from her U-wing, but the cruiser is no easy matter as it is covered in defensive turrets, while you also have to get in close to get under the shield, or take a lot of time wearing it down. As I was playing on story mode, I just took a series of strafing runs and still only just pulled it off with a lot of support. However, for the sake of this playthrough, I followed my squadron leader’s recommendation to focus on the jammers…

As I make my way to the nearest jammer, I manage to take out a handful of the escorting TIEs and begin my strafing runs, making sure to focus shield balance on front or rear deflectors to give extra protection where the main firepower is coming from, while focusing my power balance to weapons during my attack and engines as I fly away. With my squadron protecting and helping me—nothing to do with the easy difficulty setting… ahem—I make short work of the jammers, and with communications now unjammed, Gunny calls the Temperance for additional fire support, leading to a pair of CR90 corvettes jumping in to help. Their additional firepower makes short work of the command cruiser’s shields and with Vanguard also able to focus their firepower on the cruiser, it’s soon destroyed.

Gunny contacts Javes to report the mission a success, and as the squadron jumps back to the Temperance fleet, Vanguard plan to celebrate in the cantina, but Javes tells us there will be no time for rest as we have a visitor, who has brought a new mission for us…

Thanks for reading. Red Five, standing by.