This will contain spoilers for The Clone Wars and Rebels

For this article, I am looking at the 104ᵗʰ Battalion. The 104ᵗʰ Battalion, under the control of the Jedi Master Plo Koon, were a Battalion with a very high reputation. Most famous for their unit called “The Wolfpack”, the 104ᵗʰ were involved in many key campaigns during the Clone Wars. The battalion was all-but wiped out early in the Clone Wars when they were ambushed by the new Separatist flagship, the Malevolence, who they had been tracking, but recovered to feature in campaigns such as the First and Second Battle of Felucia, the battle of Khorm, a humanitarian mission to Aleen and numerous crucial rescue missions, including on Vanor, Lola Sayu and Kadavo.

Leader of the famed Wolfpack, CC-3636, nicknamed Wolffe, was Plo Koon’s second-in-command. Wolffe was stationed on Kamino while still a captain in the early days of the Clone Wars, and was responsible for giving the deserter Heater a unit and mission to prove their loyalty to the Republic. Eventually promoted to commander and moved to the 104ᵗʰ, Wolffe was part of a mission to Quarmendy and the Siege of Hisseen. When the battalion was almost wiped out following the Malevolence‘s attack in the Abregado system, Wolfe was one of only 3 clone survivors alongside Plo Koon. While Master Plo and the other clones held off enemy forces, Wolffe successfully kept a distress signal broadcasting, allowing them to be rescued by Anakin Skywalker and Ahsoka Tano. During a battle on Khorm, Wolffe was injured by Asajj Ventress, losing his right eye and leaving a large scar down that side of his face, however he had the missing eye replaced with a cybernetic eye. Returning to service, Wolffe oversaw he breaking of the Separatist blockade during the First Battle of Felucia, which allowed Skywalker and Obi-Wan Kenobi to pull their forces out when overwhelmed. When the Jedi Master Eeth Koth was captured by General Grievous, Wolffe noticed Koth’s covert coded message in Grievous’ transmission that allowed the Republic to locate Grievous and rescue Koth. Wolffe was later involved in 2 more rescue missions, one on Vanqor after Skywalker and Mace Windu were left trapped in the wreckage of the Endurance, and the other on Lola Sayu after Skywalker and Kenobi’s task force saw their initial plans to escape the Citadel fall through after rescuing Jedi Master Even Piell and his men. After taking part in the Second Battle of Felucia, Wolfe and the battalion found themselves diverted to a mercy mission on Aleen on their way to combat the Separatists’ annexation of the Qiilura system, before taking part in the rescue of the Togruta people from their slavery on Kadavo. When Ahsoka Tano was accused of the bombing of the Jedi Temple, Wolffe led a unit of troopers who initially failed to arrest her after finding her with Ventress, before successfully arresting her next to the nanobots that had been used in the bombing. Wolffe was also part of the unit who tracked down a distress signal that led to the shuttle of Jedi Master Sifo-Dyas.

While his role in Order 66 is currently unknown, Wolffe removed his inhibitor chip at some point (likely after Order 66) and eventually settled on Seelos with fellow clones Rx and Gregor on an old AT-TE, before eventually joining the Rebellion a couple of years before the Battle of Yavin.

A sergeant within the Wolfpack, Sinker ws a part of the mission on Quarmendy, before being one of the 3 clones to survive the attack of the Malevolence in the Abregado system. Not expecting anyone to come find them, Sinker nevertheless helped hold back droid clean-up crews while Wolffe kept a distress signal broadcasting that allowed them to be rescued. Sinker later took part in the Second Battle of Felucia and the mercy mission to Aleen, and was also the trooper who picked up Master Sifo-Dyas’ shuttle on scanners when they trace a distress signa to the moon of Oba Diah.

A corporal within the Wolfpack, Comet was a part of the mission on Quarmendy, but was not present when the battalion was almost wiped out in the Abregado system. Comet was involved in the rescue of Generals Skywalker and Windu on Vanqor, the Second Battle of Felucia and the rescue of the Togruta from Kadavo. On the moon of Oba Diah, Comet was the lead of one of the external search parties hunting for the source of a distress signal, but the unit struggled to find anything until Master Sifo-Dyas’ shuttle was found on scanners.

Boost was one of the troopers in Sinker’s squad within the Wolfpack. As such, Boost was a part of the mission on Quarmendy and the Siege of Hisseen. When the fleet the battalion was on came under attack from the Malevolence, Boost was one of 3 clones to survive, joining Master Plo, Wolffe and Sinker in an escape pod. Working with Sinker, Boost managed to restore power to their pod, before defending it from incoming droid clean-up crews. Later in the war, Boost took part in the Second Battle of Felucia and the mercy mission to Aleen.

A pilot assigned to the 104ᵗʰ, Warthog took part in the First Battle of Felucia, providing fighter cover for the gunships as they evacuated Skywalker and Kenobi’s forces. He was later involved in the mercy mission on Aleen and the rescue of the Togruta from Kadavo.

A pilot assigned to the 104ᵗʰ, Corvis was involved on the mission on Quarmendy, piloting a LAAT/i gunship to get Wolffe, Comet, Sinker and Boost to the Nexus, a floating city and trading outpost that was controlled by the Separatists and the target of the unit’s infiltration mission. 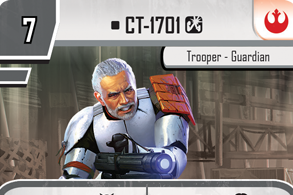 CT-1701, otherwise known as “Wildfire” was a trooper in the Wolfpack. Little is known of his service during the Clone Wars, but after the Rise of the Empire, Wildfire left Imperial service and instead fought for the Rebellion.