Welcome to my first episode review for The Bad Batch. My reviews will follow my usual format: an overview of the plot (so be aware, there will be spoilers!), my review of the show, then a few “Moments in canon” – references that link to other media and the galaxy as a whole. Today, we’ll be looking at episode 12: “Rescue on Ryloth”. 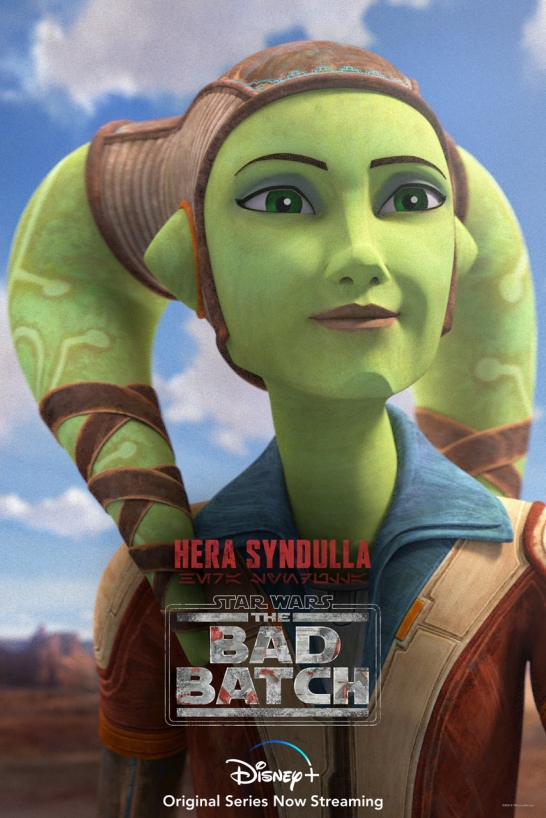 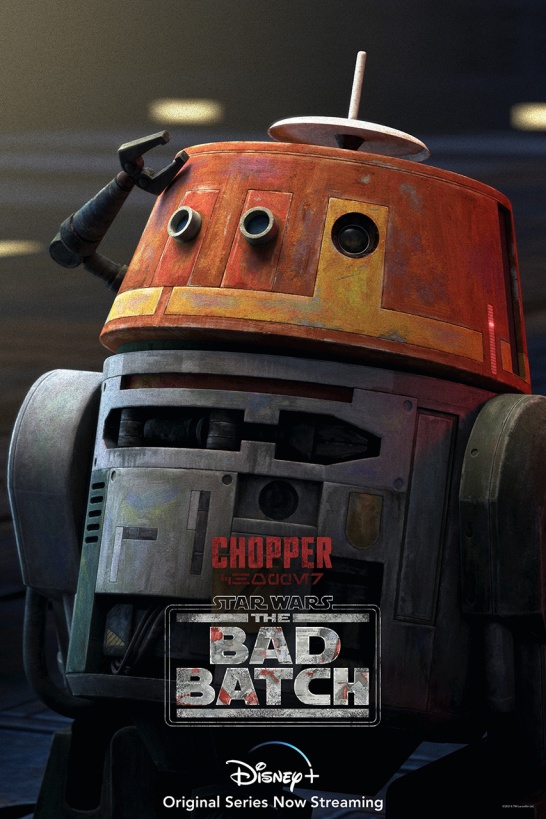 Admiral Rampart and Captain Howzer visit Gobi and the Sydullas in prison. After gloating about the situation, Rampart tries convincing Eleni to say where Hera is, but she refuses. As they leave the detention area, Rampart orders Howzer to round up all of Syndulla’s reporters. Howzer is hesitant, saying that not all of Cham’s supporters are insurgents, while also stating that it wasn’t Cham or his fighters who shot Orn Free Taa. Howzer intends to search for Hera, but Rampart states that there is already a squad on the case. That squad is Crosshair’s, and they are searching the Syndulla estate for Hera, who is actually watching them form a nearby vantage point. Hera and Chopper make their way to Gobi’s base, where they send out a transmission to Omega for help. On their way back to Ord Mantell, the Bad Batch receive Hera’s transmission. Though they initially feel that it is not their job to rescue everyone, Omega convinces them to help.

“Omega, it’s a big galaxy. We can’t put ourselves on the line every time someone’s in trouble.”

“Why not? Isn’t that what soldiers do?”

Arriving at the base, The Bad Batch meets Hera, who explains who her parents are and that she wants the Bad Batch to free them. They are initially reticent about helping, but Hunter agrees to a reconnaissance to assess the situation. Assessing the capital from the nearby cliffs, they oversee Rampart addressing the populace, informing them of Syndulla’s arrest for the attempted assassination of Orn Free Taa, who is said to be recovering. The Bad Batch note that the similarities to the military occupation on Raxus, even though Ryloth was not a Separatist world, and also realise that Crosshair is present. Hunter realises that the group are being watched by a probe droid and takes it out, but successfully guesses that it will have already transmitted their presence to the Empire.

Crosshair is informed of the droid’s transmission and goes to Rampart, who is still arguing with Howzer about arresting all of Syndulla’s supporters, as Howzer warns this will likely incite an uprising. Crosshair informs Rampart that the Bad Batch are nearby and wants to go after them, but Rampart has him continue his search for Hera.

“She’s trying to save her family, Hunter. I’d do the same for you.”

Back at Gobi’s base, Hunter decides that the Imperial presence is too much of a risk for Clone Force 99 to continue their mission, but offers to take Hera to someplace safe. Hera offers as much money as she can, but Hunter says that all the money in the world is not worth the risk, upsetting Hera. Omega reminds Hunter that Hera s just looking to save her family, exactly what Omega would do for the team, and goes to console Hera. Omega convinces her not to give up, and to use her knowledge of the planet to come up with a plan that can win Hunter over, which Hera manages to do: attacking the new Imperial refinery to draw the Imperial forces away from the capital.

The first stage of the plan sees Chopper infiltrate the refinery as one of the droids being brought in to work. He makes his way to a console where he tries to shut down the system controlling the automatic cannons around the facility, however he is caught by a pair of regs. Having to improvise a Plan B, Omega and Hera commandeer an Imperial shuttle and use its blasters to destroy the system controlling the turrets, while also providing a distraction for Chopper to escape. With the turrets down, Tech and Wrecker begin attacking the facility in the Havoc Marauder.

Hearing of the attack on the refinery, Rampart orders Howzer to guard the capital while he takes the majority of the Imperial forces to the refinery. However, Crosshair guesses that this is a diversion form Clone Force 99 and holds his unit back. Hunter and Echo successfully infiltrate the capital and free the Syndullas, Gobi and his captured fighters from the cells. They make their way to the main exit, by are stopped by Howzer, who warns them that Imperials are waiting outside the door and apologises to Cham for not realising the Empire had gone too far earlier. The group decide to escape using Senator Taa’s shuttle from an upper level of the building and tell Howzer to come with them. Howzer refuses, however, as he can’t leave his men behind. As the escaping prisoners make their way up to the shuttle, Howzer steps out alone against his men and Crosshair’s unit and speaks to them:

“Brothers. What are we doing? We came here to free Ryloth from Separatist control, and we succeeded. But look around you. We’re now being ordered to target the very people we swore to protect. And I will not be a part of it any longer. Who will stand with me?”

Howzer throws done his weapon, and the majority of his clones follow his lead, but they are all arrested by the remaining regs and Crosshair’s unit. As they are arrested, the prisoners successfully escape in Taa’s shuttle.

Everyone rendezvous at Gobi’s base, where Cham and Eleni hand Hunter the money Hera promised him. Hunter tells them to keep the money, as they will need it. Hunter tells them that similar occupations are happening everywhere, and Cham prepares to once again have to fight for Ryloth’s freedom. After Tech teaches her how to scramble a ship’s signature, Hera bids farewell to Omega and thanks her for believing in her.

Crosshair finds Rampart looking over the remains of the refinery. Rampart admits to Crosshair that he underestimated the Bad Batch despite the warnings, and grants Crosshair permission to go after them.

This really was a great follow-up to the previous episode and I really enjoyed it. But I must admit that there were a couple for decisions taken in this episode that left e really surprised.

Let me star by saying something that I forgot to say last week, probably as it has just become something that I expect of this show now, but the show has once again looked incredible! Ryloth always looked nice when seen in the early seasons of The Clone Wars, but returning there now with much more modern animation has resulted in some absolutely beautiful shots over the last couple of weeks. Say what you want about the show, the animation has been top quality!

So in terms of broad strokes, this was a largely predictable episode: Hera called the Bad Batch, who came to help free her parents (with help from Howzer) and set up the Free Ryloth Movement. The big questions were really how it would all go down and what the cost would be. As such, I was pleasantly surprised to see Hera come up with the plan to use taking out the refinery as a distraction. We saw the Spectres use distractions frequently in Rebels, and it also shows that tactical mind and leadership quality that makes sense not just as the daughter of Cham Syndulla, but a future leader of the Rebel Alliance. But more than that, it was also the case of using a location that was introduced in the last episode in a way that could have perhaps been guessed but wasn’t too obvious to viewers.

There were however some surprises to me. First of which is one of my biggest issues with the episode: Hunter continuing to not commit to anything. This has been going on too long, with him repeatedly leaving Omega behind for protection or being unwilling to do something as it puts his team at risk. I would have hoped that by now there would have been more growth in his character, and while it allowed for some truly beautiful lines from Omega to convince him, I cant help feel that his meetings with Cut and Rex, and seeing the occupations of Raxus and Ryloth, should have been enough to convince him to join the fight and do what is right, yet he is still refusing to d so by the end of the episode.

I also felt that this episode also highlighted one of the biggest issues with this show: it’s lack of consequences. We started well with the death of Depa Billaba and Order 66, which hits hard despite being largely offscreen, while episode 3 gave us the dark moment of Crosshair executing the trooper who disobeyed him and having his unit kill civilians, but the show has rarely even come close to that since. If Rampart is to be believed, Senator Taa survived Crosshair’s shot to the head—thereby conveniently not breaking the canonicity of Lords of the Sith—but then why not have him shot in the chest and visibly alive at the end of last week? Similarly I was certain that we would see Eleni killed in the escape as we know that she is killed fighting the Empire, but she barely even had a shot fired at her. Similarly, I felt that Howzer was certain to lose his life when he went out against the troopers, so was shocked to see him and his men just arrested. I am hoping however that this is not the end of their story, as I want to know why they have apparently not been affected by the chip as much, with Howzer still showing individuality on his uniform and both him and his troops appearing to not be as regimented as the rest of the regs we have seen.

So where do things go from here? Well hopefully the attention goes back to the Bad Batch themselves, as we only have 4 episodes remaining. It sounds like Crosshair will be on the Batch’s tail now, so will he be catching up to them next week? Will we see more attempts from the Kaminoans to grab Omega? Or will we get a couple more episodes that appear to go nowhere before an epic ending? I came in not sure what to expect from this show, but on the whole it hasn’t lived up to the expectations set by the pilot. However a strong finish to the season could change my view and leave me hoping for a season 2.