Welcome to my first episode review for The Bad Batch. My reviews will follow my usual format: an overview of the plot (so be aware, there will be spoilers!), my review of the show, then a few “Moments in canon” – references that link to other media and the galaxy as a whole. Today, we’ll be looking at episode 4: “Cornered”. 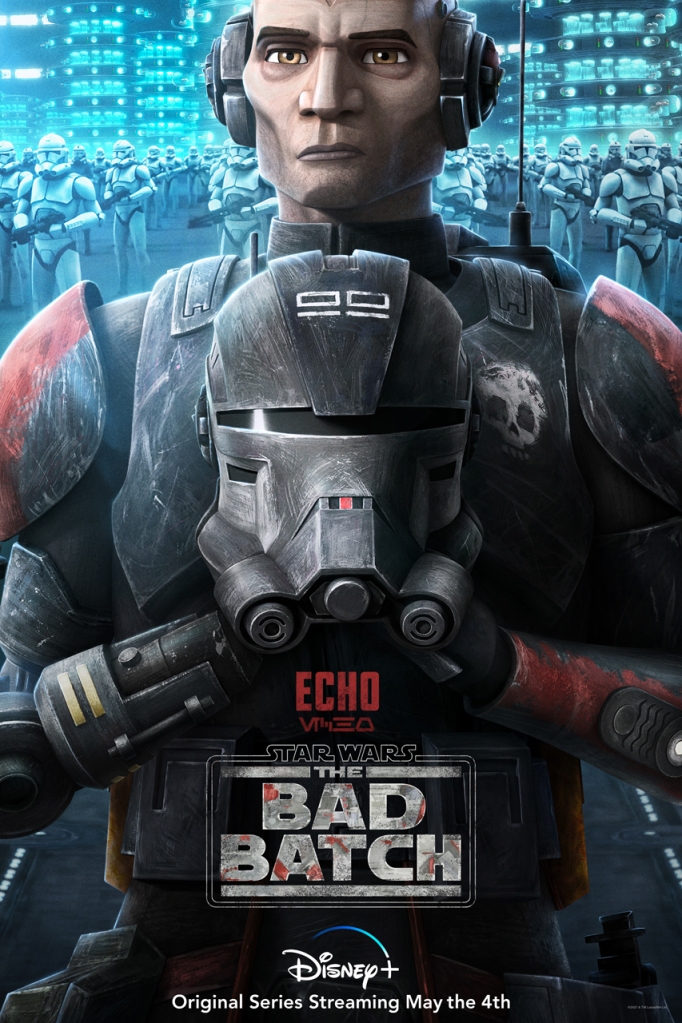 The Bad Batch are preparing to travel to Idaflor, an uninhabited planet on which they can go to ground. But before they can do so, they need to stock up on supplies. To make things more complicated, Echo discovers that their ship’s signature is on the wanted lists. Tech is confident that he will be able to change the ship’s signature, but they will need to land in order for him to do so. The group decide to go to Pantora, where they can resupply and make the necessary changes to the ship.

Having landed on Pantora, Tech and Wrecker get to work on the ship, while Hunter, Echo (who is disguised as a droid) and Omega go into town to get supplies. Unbeknownst to any of them, the Sullustan in charge of the port contacts Fennec Shand to report that the model of shuttle she is looking for has landed in his hangar.

“Things are changing quicker than I thought.”

Hunter tries to sell some of the Bad Batch’s gear in town, but the shopkeeper isn’t interested. He does however mistake Echo for a droid and offer 2000 credits. Hunter tells Echo to play along and then leave when given the signal, before agreeing a fee of 3000 credits for Echo, who is sent to become the new supervisor of 4 other droids, much to the chagrin of the protocol droid who had been in charge. The droids realise that Echo is actually an organic, but Echo threatens them with his blaster and makes them fall in line.

While Hunter is distracted by the process of selling Echo, Omega is fascinated by a passing Voorpak and goes to pet it, but the Voorpak takes a toy that she had been playing with, so she chases after it, not realising until it is too late that she is lost in the town and cannot find Hunter. Omega is found by Fennec Shand, who acts friendly towards her and pretends to be helping her find her friends, however when Hunter catches up to them, she shoots at him. Hunter tells Omega to run while he fights with Fennec, who soon incapacitates him and goes in pursuit.

Hunter contacts the rest of the Bad Batch and tells them what has happened. Wrecker leaves the hangar to find Omega, while Tech goes to hack into the city’s surveillance feeds to find and track Omega. With the ship not in a flyable condition due to the work Wrecker and Tech had been doing, Echo leads his group of droids to the hangar to complete the repairs.

Omega escapes into the maintenance tunnels under the city, where Wrecker finds her, however Fennec soon catches up to them. Wrecker again sends Omega off alone while he fights Fennec, but is quickly incapacitated. Omega finally makes it out of the tunnels, but finds herself cornered on the top of a tower, off which she soon slips, leaving her hanging on right above a lane of traffic.

Getting an update on Omega’s location from Tech, Hunter steals a swoop bike and makes his way towards the tower. Omega loses her grip, but is grabbed by Fennec who, noticing Hunter’s approach, drops the pair of them onto a passing transport. While Fennec shoots at Hunter, Omega finds a release for the cargo, which knocks both her and Fennec off the transport. Fennec falls onto another speeder, which she hijacks to continue the chase, while Omega clings onto one of the straps that had held the cargo. Hunter is about to grab Omega, but Fennec pushes his swoop bike away, however he flies back around and uses his blaster and an explosive to destroy the engines on Fennec’s speeder, causing it to crash as Hunter recovers Omega.

Hunter, Omega and Wrecker make it back to the Havoc Marauder, which Echo and his group of droids have just finished fixing, and the group fly away to safety. Once away from Pantora, Hunter tells the others what happened, and they figure out that Fennec Shand must be a bounty hunter after Omega, and they know that they will need to figure out who se is and who she’d working for.

Back on Pantora, Fennec pays the Sullustan for his information and tells him to contact her if they come back. She then contacts her employer, informing them that the target got away, but she will find her.

So this was an interesting episode, and much like how last week felt like the end of the first chapter in the story, this very much felt like the stat of the next chapter, with the introduction of someone sending bounty hunters after Omega.

So lets start with that, which was arguably the most crucial bit of information from this episode. Who has sent fennec after her, and why? The Kaminoans would be the obvious answer, assuming that Omega is required for their development of improved clones, but hiring a bounty hunter seems too obvious. We know that the Empire is generally happy to utilise bounty hunters, but so far there has been nothing to suggest they believe Omega to be anything other than a girl who escaped with the Bad Batch, who would surely have also had bounties, whereas it seemed that Fennec was specifically after Omega.

What this did well, though, was quickly remind us how great a fighter Fennec is, with her beating both of the best fighters in the group in 1v1 combat. We know her to be an elite assassin from her introduction in The Mandalorian, and this was a great way to show that. And by bringing in Ming-Na Wen to voice her, it adds a wonderful level of consistency across the stories.

It does feel like Omega is constantly getting into danger, but it feels realistic for me. She is a child, full of wonder at seeing these new worlds and new creatures, and I find her interest in the Voorpaks completely in-character, while she would also instinctively chase after the creature to retrieve her toy. Is she naïve? Very, but that is to be expected given her youth and sheltered lifestyle until now, which makes it feel genuine in a way that Kazuda Xiono’s naïvety and goofiness never quite worked for me in Resistance.

While I liked the idea of echo impersonating a droid and then leading his group of droids to repair the ship, I couldn’t help feel that the protocol droid was somewhat unnecessary, other than to give someone for Echo to argue with that we understand. I feel that these shows have done such a great job of giving astromechs personality enough in the past that we can still understand basically what they are saying—especially Chopper—that I think this could have worked as well with just Echo and the 3 repair droids. I also can’t help but be disappointed in the way that there was no continuation of Wrecker’s headaches, which suggests that my theory about his chip reactivating was wrong. I don’t have any problem with my theory being wrong, but it felt like there was just too much focus on his headache last week to be just an excuse for him to stay on the ship.