While the Star Wars movies have generally focused on a certain handful of characters, the wider canon – both series and the books/comics – are much less restricted in who they follow. While many of the characters we follow will be either new creations or supporting characters, there have also been a number of moments where a character who you would miss if you blinked at the wrong point has been expanded into a fully fleshed character who we know and love almost as much as our usual heroes. Today I’ll be looking into some of these such characters.

We’ll start with one that’s not 100% confirmed but everything lines up. You see the TIE fighter who has immediately locks onto poor John D. Branon as the Imperial fighters make contact with Red Squadron during the Battle of Yavin? For years this was just an unnamed pilot, but the opening of Star Wars Battlefront II: Inferno Squad follows Iden Versio in the battle and getting a kill almost as soon as she reaches the action, with the description fitting this moment almost perfectly, leading to many now believing that this Imperial pilot can be considered as Iden Versio.

Versio survived the battle by being far enough away from the Death Star explosion, and went on to be the commanding officer of an elite Imperial Special Forces unit, Inferno Squad, before defecting to the New Republic during Operation Cinder. Iden’s story is largely told through the above novel and Star Wars Battlefront II campaign.

Of the 30 Rebel fighters that took part in the Battle of Yavin, only 3 returned to the Rebel base alongside the Millennium Falcon: The X-wings of Luke Skywalker and Wedge Antilles… and this lone Y-wing. The pilot of this Y-wing has now become Evaan Verlaine, an Alderaanian, who has played a key role in the 5-part Princess Leia comic, whilst also appearing in a few other stories relating to the continued survival of any remaining Alderaanians and also working as a close friend and confidante of Leia.

The final one from the Battle of Yavin and the one least fleshed out in canon but with a behind the scenes story. During the briefing before the Battle of Yavin, we see Luke talking with this pilot. Now originally, this was meant to be Wedge Antilles, but the actor Colin Higgins was fired after this scene and replaced by Dennis Lawson for the Battle of Yavin, who has gone on to play Wedge in all of his other movie appearances. As such, the character has for years been referred to by fans as “Fake Wedge”, but the short story “Duty Roster” in From a Certain Point of View officially makes him into his own character, Col Takbright, who is not among the 30 pilots chosen to fly in the battle.

From the destruction of one Death Star to another. Most people remember Lando and Wedge flying into the second Death Star to destroy the main reactor, but there were a number of other pilots who followed them, some being killed by the chasing TIEs, while other split away at a fork to reduce the number of TIEs chasing the Falcon. One of which is a Y-wing flown by Nora Wexley.

Nora is a main character in the Aftermath Trilogy, who plays a key role in hunting down Imperials following the Battle of Endor, while her son Temmin “Snap” Wexley (shown below) is one of the key pilots in the Resistance.

This ISB officer watching on as Vader chokes Conan Motti may not have any lines in this scene, but is in fact a regular supporting character in The Clone Wars, Wullf Yularen. During the Clone Wars he was the admiral assigned to Anakin Skywalker, but after the Republic transitioned to the Empire, he became a colonel in the Imperial Security Bureau. In this role, Yularen also appeared in a couple of episodes of Rebels and also in the novel Thrawn. Yularen was confirmed as being on the Death Star when it was destroyed in the Battle of Yavin.

Hobbie’s defection to the Rebellion is actually shown during season 3 of Rebels, in the episode “The Antilles Extraction”, which follows Sabine helping extract Wedge, Hobbie and their friend Rake Gahree from Skystrike Academy, and he appears a couple more times during the series, as well as in a few issues of the main Star Wars comic. Sadly, Hobbie sacrificed himself during the Battle of Hoth, crashing his damaged snowspeeder into the head of General Veers’ AT-AT. 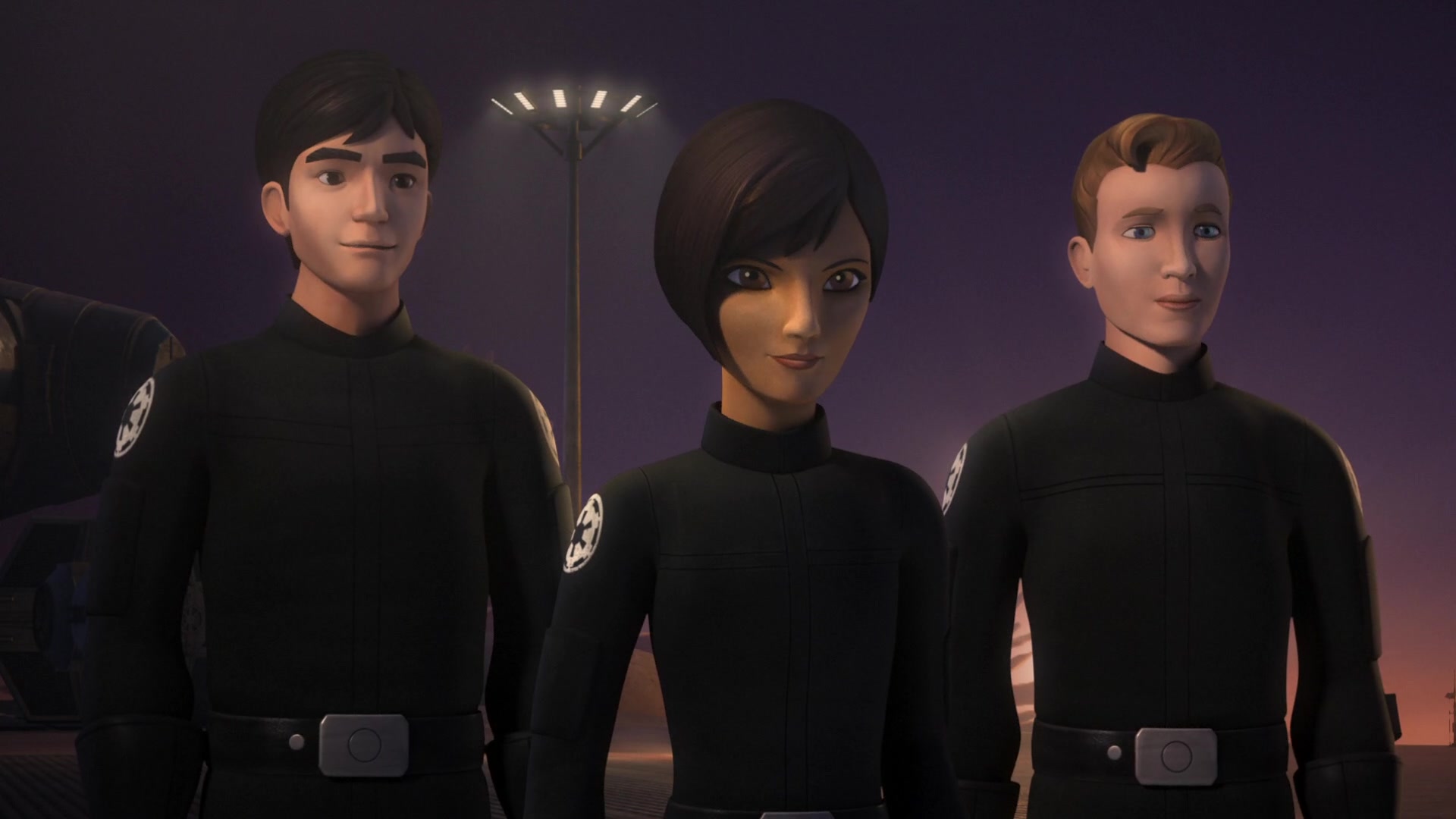 Remember that line-up of bounty hunters sent after the Falcon? Well this scaly creature obviously stands out and so it’s no surprise that he has become a regular in the wider canon. Bossk, a Trandoshan bounty hunter, appears in a number of arcs during The Clone Wars, often working alongside Boba Fett, while he also makes appearances in a number of other stories, including the Darth Vader and Bounty Hunters comic series.

Sticking in the Criminal Underworld, and during the Boonta Eve podrace, we get a moment to see this female Palliduvan. This character went on to become the famed assassin Aurra Sing, who features in the Darth Maul comic as well as a couple of arcs in The Clone Wars, helping Boba Fett look for revenge against Mace Windu, aiding Cad Bane in breaking Ziro the Hutt out of prison and also being sent to assassinate Padmé. She also gets a mention in Solo: A Star Wars Story, with Lando noting that Tobias Beckett killed Aurra.

What if I told you that when Sebulba attacked Jar Jar, there were 2 Jedi present and a future Jedi in Anakin? Well it’s true. You see that guy sat down with the yellow stripe across his face? That is in fact Quinlan Vos. Vos is a very interesting Jedi, often working undercover in the Criminal Underworld – hence why he doesn’t jump up and greet Qui-Gon – and with a rare skill called psychometry, which allows him to touch an item and feel its past.

Vos appears in an episode of The Clone Wars – “The Hunt for Ziro” – but his main story so far is in Christie Golden’s Dark Disciple, which is an adaptation of 8 unfinished episodes of The Clone Wars. Interestingly, the Darth Vader: Dark Lord of the Sith comic series suggests that Vos may have survived Order 66, so don’t be surprised to see him return in some form at some point.

We started with one that is somewhat of a headcanon and end with another that is unconfirmed but very heavily suggested. Have you ever noticed the old man in Han’s group of Pathfinders who impersonates a scout trooper as the rest of the group attempt to destroy the Shield Generator on the Moon of Endor? Well the popular theory now is that this is none other than the Jango Fett clone CT-7567, otherwise known as Captain Rex.

Anakin Skywalker’s second-in-command during the Clone Wars, Rex was a regular throughout The Clone Wars, eventually going with Ahsoka Tano to help oust Maul in the Siege of Mandalore. After having his chip removed, Rex helped Ahsoka escape Order 66 and somewhere along the line in the following years joined up with fellow clones Gregor and Wolffe. The trio eventually joined the Alliance to Restore the Republic, now as much older men due to their accelerated aging -with Rex’s bushy white beard leading to the original speculation of Rex being on the moon of Endor.

As the years went on through the seasons of Rebels, Rex’s armour slowly changed from his old clone armour to a hybrid of his old armour and that worn by the Pathfinders, while the Epilogue in the Rebels finale confirms that Rex was at the Battle of Endor. As someone who, along with Commander Cody, created many of the protocols later used by the Empire, it certainly makes sense that such a capable soldier would join Han’s unit and be the one to impersonate an Imperial.

Also, expect to see more of Rex’s story shown soon, as the trailer for The Bad Batch showed that he will appear in this series too. 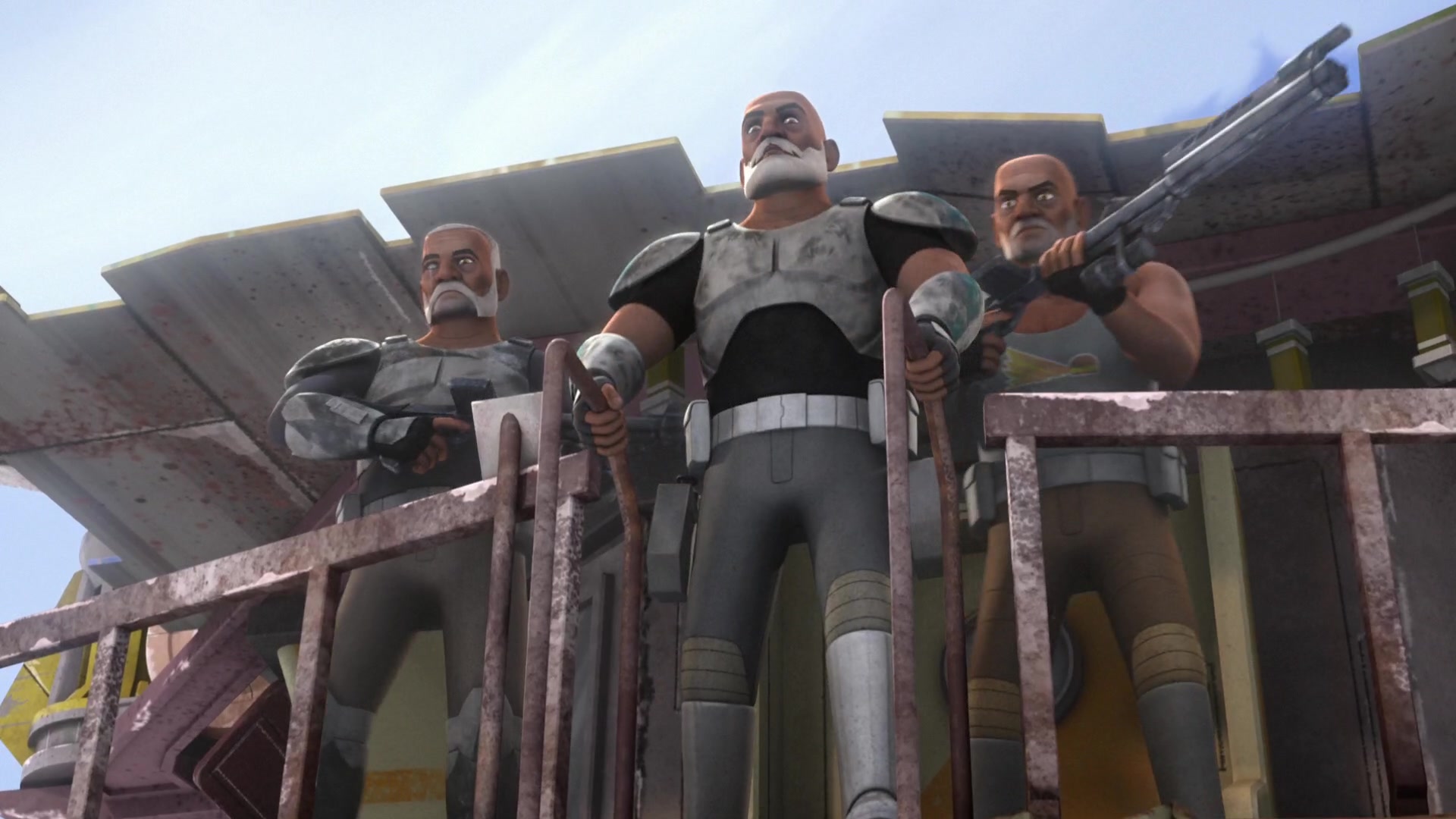 And this is just for now. Imagine what the canon will be like in 10 years’ time…