Welcome to my latest episode review for The Mandalorian. The reviews will follow my usual format: an overview of the plot (so be aware, there will be spoilers!), my review of the show, then a few “Moments in canon” – references that link to other media and the galaxy as a whole. Today, we’ll be looking at Chapter 10: The Passenger. 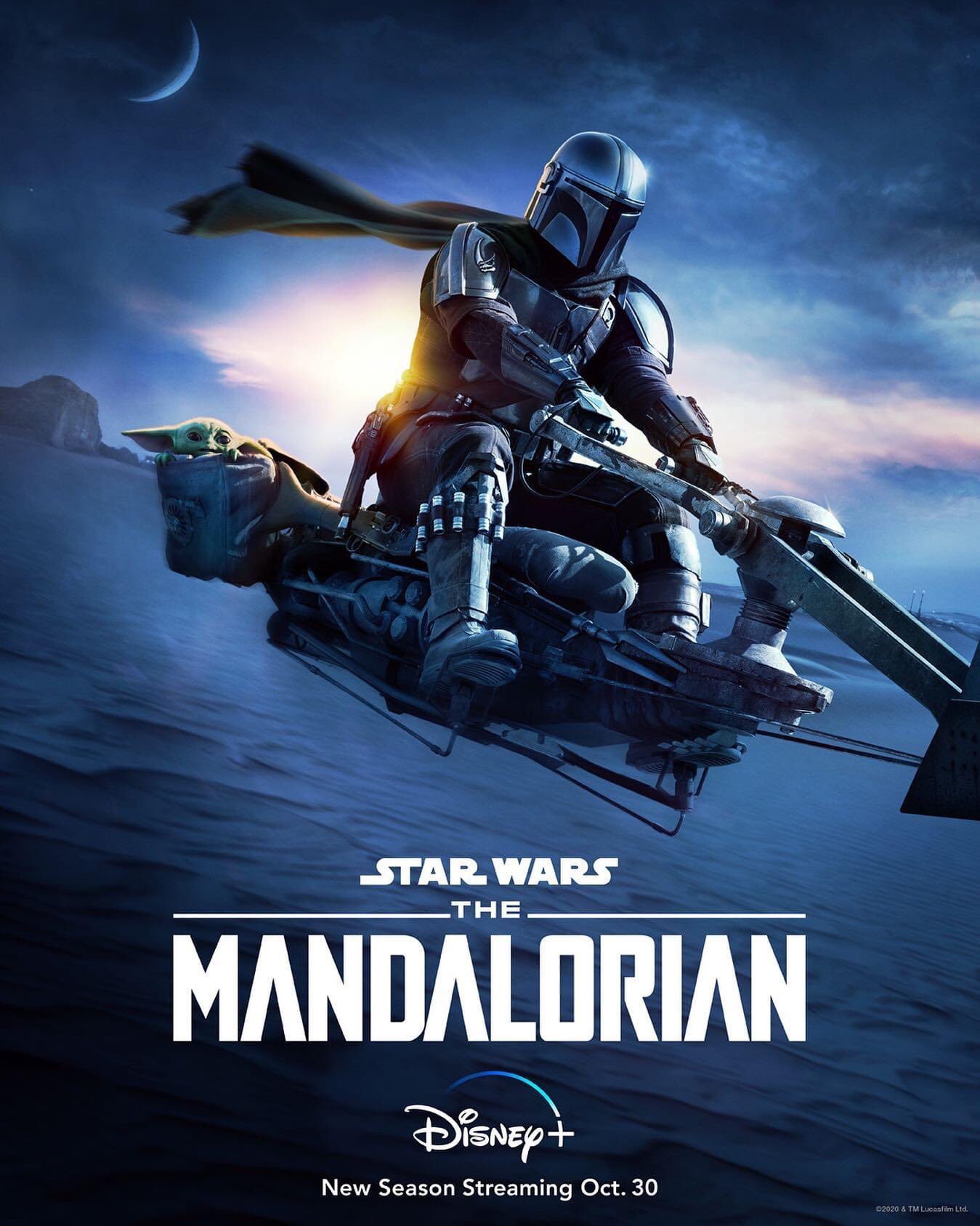 Din and the Child are travelling back from Mos Pelgo when they are ambushed by a group of bandits. Din kills and incapacitates the bandits, but the speeder bike he borrowed from Peli Motto is destroyed, leading to him having to carry The Child and all their gear back to Mos Eisley.

Din meets Pelli in the cantina, where she is playing sabacc. Her opponent has a contact who knows where a group of Mandalorians can be found, and agrees to send them to Pelli’s hangar. The contact turns out to be a Frog Lady, who needs passage to her husband on Trask. She is carrying a jar of her eggs, which need fertilizing soon, but the eggs mean that the Razor Crest will have to travel sublight rather than jumping to hyperspace. The husband is the one who knows where Mandalorians can be found, and will give Din the information if he gets the Frog Lady and her eggs to him in time.

“Moving fast is the only thing keeping me safe.”

As the Razor Crest travels to Trask, they encounter a New Republic patrol made up of 2 X-wings, piloted by Trapper Wolf and Captain Carson Teva. The pilots inform Din that under New republic laws, he now needs to show his transponder signal and ask him to send a “ping” to prove that he is not part of an Imperial hold-out. From the transponder signal, they are able to link the Razor Crest to the New Republic Correctional Transport which the prisoner Qin was broken out of. Din tries to escape by diving into a nearby planet’s atmosphere and flying through a canyon, but they end up crashing and heavily damaging the ship.

With the outside temperature freezing cold, Din plans to wait until morning to look at repairing the ship, but the Frog Lady – who has been unable to communicate with Din due to a language barrier – utilises the remains of Zero to translate for her and explain that this is her last batch of eggs and her husband has found the only place hospitable for their species to survive. She appeals to the Mandalorian code of keeping one’s word, which convinces Din to get to work on the ship.

“I thought honouring one’s word was a part of the Mandalorian code. I guess those are just stories for children.”

While Din repairs the ship, The Child draws his attention to footsteps in the show, which show that the Frog Lady has left the ship and gone exploring. Din follows her footprints and finds her in a hot spring, where she is keeping the eggs warm. The Child, who has been repeatedly trying to eat the eggs and been told off multiple times by Din, catches Din’s attention as hundreds of eggs laid in the cave begin to hatch to reveal baby spiders, which are soon joined by some slightly larger spiders and the much larger mother spider.

Din and the Frog lady quickly collect the eggs back into their jar and the group run back to the Razor Crest, with Din doing everything he can to take out as many of the chasing spiders as possible. The spiders continue chasing them into the ship, however Din intends to try piloting away with the intention that the cockpit can be pressurised separately, allowing them to fly away while the spiders in the rest of the ship are sucked into space. However, the mother spider jumps onto the cockpit and begins breaking through the viewport.

“Am I under arrest?”

“Technically, you should be. But these are trying times.”

Suddenly, the spiders start being blasted. Din makes his way out of the ship and finds Wolf and Captain Teva have killed or scared away all of the spiders. The pilots note that while Din was involved in Qin’s escape, he also captured 3 other known criminals (Mayfeld, Burg and Xi’an) and tried his best to resolve the standoff with Daven peacefully. The pilots choose not to arrest him and remind him to fix his transponder so that they don’t blow him up next time they see him.

With time of the essence, Din repairs the cockpit so that the Razor Crest is able to fly in space and they take off, limping towards Trask.

Hmm. After a brilliant opening to the season, this was probably my least favourite episode of the show so far. “This is the Way”? More like “Is this the Way?”

Right now, this feels like an almost unnecessary episode, with so much of what happened feeling repetitive. Just like Chapter 2, Din finds himself ambushed at the start of the episode by a group trying to grab The Child. The episode goes on and Din finds himself dealing with hostile creatures, just this time a host of spiders rather than a mudhorn, while once again the Razor Crest is in a degree of disrepair. The passenger had the chance to add a different dynamic, but I felt that the language barrier left us with just Din able to speak for too much of the episode. The one thing that I will say in its defence is that this looks to be part 1 of the story, which will continue in the next episode, so it may be a slow build that gets paid off next week.

“Whether its pirates or warlords, someone either ends up with a nice chunk of change or your ship.”

And then there’s the whole subplot of The Child trying to eat the eggs. After working so hard last week to take the Tusken Raiders from savages to genuine people, it felt like The Frog Lady not being given a name and The Child constantly eating her eggs – not just trying, but actually succeeding on at least 3 occasions without any reaction from the mother – felt like the passenger was being taken own from a legit character to just an animal, which really went against the importance of getting to Trask to preserve the species. Were these moments meant to be funny? Because they didn’t really come across as such. It just felt like this episode didn’t know what it was trying to do.

I must admit that I also found myself a little lost in the scenes with Pelli. Amy Sedaris continues to feel out of place in the show, but I felt that on first viewing it got too difficult to keep track of where the Frog Lady had come from as a contact, with Pelli speaking as a translator for both the Frog Lady and Dr Mandible (also, is that a real name? Cos that just seems too on point). I can’t help feel that in this episode we’d have benefited from at least Dr Mandible and maybe even the Frog Lady speaking Huttese (which Din understands, but we could have seen subtitled – just think of the scene between Han and Greedo).

“Was your craft in the vicinity of New Republic Correctional Transport, Bothan-Five?”

For me, the best bits of the episode were the tie-ins to Chapter 6. With the language barrier between Din and the Frog Lady, it was clever to see Zero’s vocabulator used as a translation tool, while it is perfectly understandable that Din would keep his remains for spare parts. Seeing Dave Filoni return as Trapper Wolf was a great moment and I hope that he continues to cameo throughout the show. It was perfectly understandable to see Din try to escape once he was linked to Qin’s escape, but I also liked how the pilots chose to not arrest him and in fact help him (to a degree) when they reviewed all of the evidence and found that he tried to protect Davan and apprehended the rest of the gang.

All in all, not an episode that has initially hit with me, but it may be that once the season is over, its role becomes clear and I appreciate it more.

“He was my last lead on finding other Mandalorians.”

Thanks for reading. This is the Way.

3 thoughts on “The Mandalorian: Chapter 10”