Welcome to my latest Book Review. In this series I will look to review any canon books that come out in the Star Wars galaxy as I work my way through them. I am no expert book critic or expert in writing (as you may be able to tell), so this is very much from a fan’s point of view. In each review, I will also try to point out a few “Moments in Canon” – moments that link into the wider canon and references to other canon stories. Today I will be looking at Claudia Gray’s Bloodline

There may be some mild spoilers 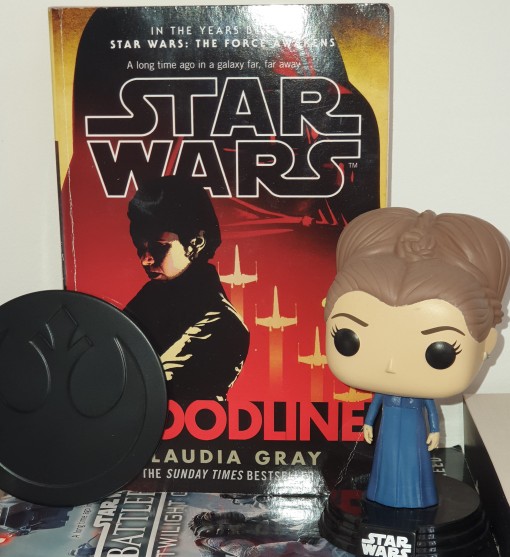 Set approximately 6 years before the Sequel Trilogy, Bloodline sees Leia looking to do one last mission before bringing an end to her time as a senator. However, when her investigations suggest the threat may be larger than initially thought, she must look to unexpected allies as she seeks to find answers.

When she thought of her father, she thought only of Bail Organa. He had been her father in spirit, and surely that was more important than anything else.

While Leia is the main viewpoint, there are also a number of other characters used as points of view, most notably Leia’s personal assistant Greer Sonnel, New Republic pilot Joph Seastriker and senators Ransolm Casterfoe and Lady Carise Sindian.

I have been full of praise for Claudia Gray’s other novels that I have reviewed (Lost Stars and Leia, Princess of Alderaan), so when I say that this is probably my favourite of Claudia Gray’s stories – and maybe even my favourite Star Wars novel – I think that says it all!

It had been a long time since Leia felt that untouchable.

Claudia Gray does such a great job of writing Leia at any stage of her life. In this book we really see the senator who is becoming tired of the Senate’s limitations, but there is still plenty of the Rebel hero in her heart and plenty of the General that we know she will still become. It is not just Leia who is written well, though, but in my opinion all of the significant characters. Lady Carise Sindian is generally unlikeable but you can imagine people like her, who still put too much stock in bloodlines and inherited titles rather than earned reward. Ransolm Casterfoe is so wonderfully written in the way that he goes from the antagonistic face of the other political party who could not be any less like Leia, to one of the wittiest, most trustworthy characters who pairs wonderfully with Leia. But what is made even better about the way the characters are written is that we find this not just by his character changing as he opens up, but also Leia’s perception of him changing as time goes on and she begins to trust him. Joph works as a great young pilot looking for excitement and adventure. He feels very similar to Poe, but I like that a different character was used as otherwise I think that the world would have felt too small, while it also allowed for him to have a softer side that we don’t get to see so much from Poe. In a similar way, it was great to see Greer, a character who used to be very much like Joph but is now in a very different phase of her life, though reluctant to fully let go of her past. Finally, I just need to take a moment to mention Korr Sella. We see her on Hosnian Prime as it is being destroyed in The Force Awakens but as this was the only scene with her in the movie, it is just lost in the moment. However having read this story and got to know her more as a character, I find that there is much more impact when watching the film.

How long had it been since somebody in the Senate had stood up and actively offered to do something useful?

Tying in very much to the characters, this novel manages to do something that the Prequel Trilogy tried and failed to do: get the politics right! There is just enough information given for us to understand, but then it uses Leia’s jadedness and her wandering thoughts to stop us becoming over-saturated. I also feel that it does a very accurate job of showing a two-party system and the issues that it creates of people voting along the party line whether they feel that it is right or not, so no justice being done – something that we are seeing enough in the real world! The book also makes sure that it doesn’t bog itself down in the politics, interspersing the more political scenes with Leia’s investigation and other events that make sure the book has sufficient action to feel well-balanced.

Watching the movies, you can wonder how after the horror of the Empire, a new force like the First Order could become such a threat within just 30 years, but this novel does a great job of answering that with the inability of the Senate to efficiently follow up on anything that looks worrying, helped by some senators who are already working for the First Order doing anything they can to derail the plans of those trying to reveal the truth.

Few militias were so large. Even fewer with such precision. Almost none had a fleet of starfighters as fast and well armed as those of the New Republic fleet.

In terms of the story on the whole, I love the way that it develops naturally due to characters’ motivations. It never feels like someone is acting out of character to further the story, which meant that I never found myself being thrown out of the story. As the story reached its end, it certainly had the desired effect on my emotions with some wonderful scenes to bring this story to an end and tie in to the wider Star Wars story.

Joph turned to grin at her, openmouthed. “We’re involved in espionage.”

Definitely! This is not to be missed for fans of Leia or of Claudia Gray’s Star Wars stories. I would go as far as to say that this would be one of the first books I recommend to people looking to get into reading Star Wars books and feel comfortable naming it in my top 3 Star Wars books.

Leia’s confusion crystallized in an instant around one of her most terrible fear: He knows.