Welcome back to my series “Battlefront II Revisited”. When Star Wars Battlefront II was released in November 2017, a large part of my excitement was directed towards the inclusion of a single player story mode, which would be telling a new story in the canon and following a new set of characters: Inferno Squad. Having completed the story mode rather quickly, I have only really played the game in patches since as online multiplayer shooters are not really my thing, but all the recent improvements and new content have had me playing a bit more recently and I decided it would be fun to return to the story mode and give my thoughts on each level. Today looks at the 8th mission General Distress

Please be aware there will be spoilers for the story

Skipping forward a few months, Inferno Squad (now including Shriv) are still on the Corvus, which is now a part of the New Republic fleet hunting down any remaining Imperials. Princess Leia contacts them as she needs them to find a general that has gone missing: Han Solo, who was last seen on Takodana.

“I need you to find Han Solo.”

Our story goes to Takodana and Maz’s castle, where we see Han talking with Maz. Instantly, something is different: Han now has a beard, which I loved as Aftermath: Life Debt mentioned that he had grown one and the dialogue in this cutscene places the mission between Aftermath and Aftermath: Life Debt. The dialogue is great in this scene as it really helps further the relationship between Han and Maz, while also tying into The Force Awakens by returning to the joke about Maz and Chewie. Han explains to Maz that he is looking to free the Wookiees on Kashyyyk, and is meeting an Imperial turncoat called Ralsius Paldora, who has information that could help. Han has come to the castle to meet Paldora while Chewie has stayed with the Falcon to do some work on it… typical. 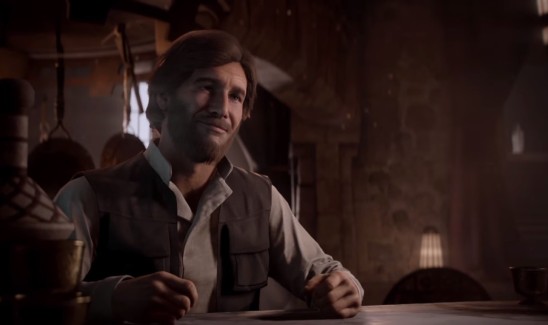 And so the mission begins and, if it wasn’t already clear, we’re playing this mission as Han. While it’s awesome to have played as all of the big 3 by this point and Han suits my playing style more than Leia, I can’t help but feel that for Inferno’s story, we’re spending a bit too much time pushing them to the side to play as the big names.

The first part of the mission is to find Paldora by speaking to a couple of people who can give you information to help pick out Paldora. It’s fun taking a moment to walk around the busy castle and overhear some of the other conversations, with a number of deals taking place and some fun conversations to overhear, we are also able to go tot he lower level and stand outside the room where Rey finds the lightsaber in The Force Awakens and I love how the background music and dialogue fades away as we stand directly outside of the room. Eventually we find Paldora upstairs, but he has not brought the information with him, instead hiding 2 data cubes outside in the forest. Paldora is ridiculously annoying and over the top (think Threepio as a human). Paldora says that one of the data cubes has Imperial information for the New Republic in exchange for safe passage and asylum, while the other has information for Han that will help him on Kashyyyk. When asked where he got the information, Paldora said it was from a man named “Rax”, a name Han doesn’t recognise but another great nod to the Aftermath Trilogy.

“I assume this is your fault?”

“What’s my number one rule, Solo?”

As Han and Paldora leave the castle, they see Imperial shuttles landing… this mission just got more interesting. What follows is sneaking (with limited success) and blasting (much more the Han Solo route) any stormtroopers and Imperial officers that get in the way, clearing 2 locations before you can find the data cubes, which are stored in 1 of 3 containers at each location. Personally, I didn’t understand the need for the dummy containers as they do nothing to impact the mission except add on a minute or so of pointless walking around a safe area.

Once we have the data cubes, it’s time to fight through another group of stormtroopers to reach the Falcon, while Chewie preps the ship, we hold off the Imperial attack as a couple of shuttles arrive at the far end of the landing area – something that feels very similar to the ending of The Storm and The Battle of Endor. After a while of taking out Imperials, a group of X-wings arrive and take out the shuttles – Inferno Squad!

“General Solo, this is Iden Versio. Inferno Squad is here to help.”

To finish the mission, we get into the Falcon and get the chance to pilot the fastest hunk of junk in the galaxy in a dogfight over the lake. With the Falcon‘s Dual Concussion Missiles and Special Modifications, its a pretty easy job to take down the Imperial Light Cruiser and squadron of TIE fighters.

With the Imperial forces defeated, Inferno Squad plan to escort Han back to the fleet, but Han has other ideas and sends them a set of coordinates to meet. At the rendezvous point, Han boards the Corvus and contacts Leia, who wishes him luck helping the Wookiees. Han bids goodbye to her and Inferno before returning to the Falcon. Inferno tells Leia that the intel Paldora gave Han includes information that Admiral Versio is running operations on Bespin and Sullust. Iden wants to go after him but is worried that the Fleet would not allow them to undertake such a personal mission, but Leia gives them permission, leading to the next mission…