Welcome to Book Reviews. In this series I will look to review any canon books that come out in the Star Wars galaxy as I work my way through them. I am no expert book critic or expert in writing (as you may be able to tell), so this is very much from a fan’s point of view. In each review, I will also try to point out a few “Moments in Canon” – moments that link into the wider canon and references to other canon stories. Today I will be looking at Delilah S. Dawson’s Phasma.

There may be some mild spoilers 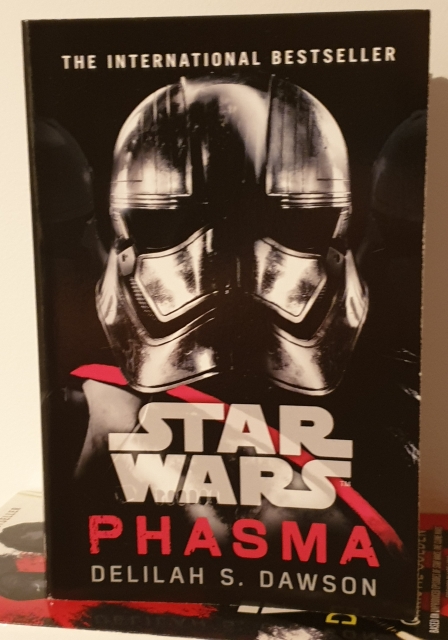 Set shortly before The Force Awakens, Phasma follows Resistance spy Vi Moradi, who has been captured by the First Order and being interrogated by a stormtrooper officer named Cardinal, who wants information on Phasma.

The majority of the narrative is Vi’s telling of the story of Phasma back on her homeworld Parnassos.

Phasma began to look less and less like an animal and more like a trooper. Under that helmet, she could be anyone or no one. She didn’t even seem human.

The main points of view for the “present day” sections of the story are Phasma and Cardinal, while the story is being told from the point of view of Siv, a member of Phasma’s tribe on Parnassos. Oddly for a book where Phasma is the title character, Phasma herself rarely appears as a point of view character.

Phasma is to me the Boba Fett of the Sequel Trilogy (looks awesome but does nothing in the movies to back that up) so to say I enjoyed this novel is a testament to Delilah S. Dawson and her writing.

“Phasma will do anything to survive.”

This story made me so much more interested in Phasma, as she went from someone who was basically a stormtrooper with a name and cool armour to a complete character in her own right. I love how this story really helps to make clear Phasma’s motivations: her own survival is her selfish priority and much more important to her than her loyalty to friends, family or allies. This makes her actions in The Force Awakens of disabling Starkiller Base’s shields much more understandable, while the way that her desire to keep her face covered adds so much more impact to her final moments in The Last Jedi., when her helmet has been damaged, revealing her eye.

I also really liked the character of Vi, and the way that she is so good at using her skills as a spy in a way that her captors would never even realise that she has them right where she wants them, while I also liked getting to see The First Order through the eyes of Cardinal as he begins to realise that maybe the First Order is not as righteous as he has been brainwashed to think. In the Parnassos story, all of the main characters are very well defined within their group and feel natural as a tight group of warriors: Phasma the leader, Torben the muscle, Siv the medic/pastor and Gosta the scout/youth of the group. They all have their own distinct differences between each other, but when then compared to Brendol Hux and his stormtroopers, there are incredibly clear boundaries between the two groups – they couldn’t be more different! What I also really like is that we can’t fully trust the depictions, as this is a story told by Siv and then retold by Vi, who admits in the story that she may have “embroidered” details, creating an unreliable narrator which helps us see Phasma go from hero to monster in the eyes of her people.

That was all they had in the Scyre: one another, and hope

I also must say that I really like the structure of the story, with the present day storyline creating a frame narrative in which to tell Phasma’s story (if you’re unsure what I mean by frame narrative, think of The Princess Bride). I do however wonder if the Parnassos story had too much happen for one adventure; there were a couple of times where I thought that surely they were going to reach Hux’s ship, only to see them fall into some other trap or encounter some other danger.

Finally – and this is not the fault of the novel at all – it has also left me with questions over troopers having unique armour and names. I really like how this was explained in the novel as being due to Hux’s extreme trust in both Cardinal and Phasma, allowing them to have names and unique, coloured armours. This has however left me with questions about Major Vonreg and Commander Pyre from Resistance, so I really hope that at some point we get to know more of their stories.

I wonder if her helmet hid tears.

If you are a fan of Phasma, this is a must-read. For other’s who, like me, are indifferent to the character, I think that it is worth a read. I wasn’t familiar with Delilah S. Dawson before this novel, except her short in From a Certain Point of View, but I am very excited to read more of her Star Wars content!

Perhaps Phasma was changing, or perhaps she was merely showing her true nature for the first time.