Welcome to Book Reviews. In this series I will look to review any canon books that come out in the Star Wars galaxy as I work my way through them. I am no expert book critic or expert in writing (as you may be able to tell), so this is very much from a fan’s point of view. In each review, I will also try to point out a few “Moments in Canon” – moments that link into the wider canon and references to other canon stories. Today I will be looking at Chuck Wendig’s Aftermath: Empire’s End. 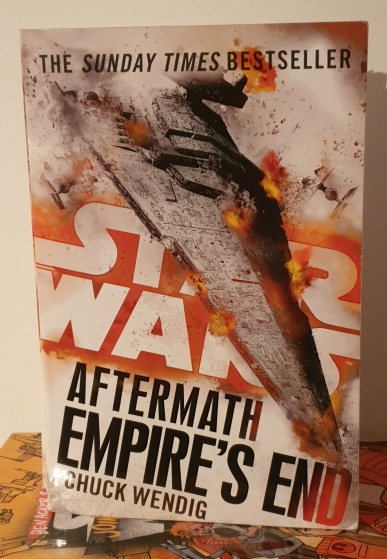 Released in 2017, Aftermath: Empire’s End was the 3rd and final book of the Aftermath Trilogy, the first series of adult novels in the new canon.

Following on shortly after the events of Aftermath: Life Debt, the finale sees Norra and her crew hunting for Rae Sloane, who they believe to be guilty of the atrocities form the previous novel. Meanwhile, Sloane has travelled to Jakku in an attempt to wrest control of the Imperial forces from Gallius Rax, who has been controlling things from the shadows and is instead coming close to the mission given to him by Emperor Palpatine.

As with the previous novels in the trilogy, the story is told from a number of points of view, including Sloane, Raz, Temmin, Norra, Jas and Sinjir, while the story also continues to include interludes, showing the stories of others around the galaxy.

After a decent opener and a very strong sequel, the finale continues in the vein of the 2nd book and brings a good end to the trilogy. The characters all continue to evolve in a way that feels natural to both themselves and the larger story – The only character I didn’t like was Norra, who becomes very focused on revenge in this story, though I completely understand why given that she blames herself for the events of the last novel.

Though there is still a time jump of a couple of months (the same as between the first 2 books), this one seems to follow on more directly from its predecessor than Life Debt did from the original, making this feel more like a part 2 of a larger story, which I think helps as we are able to jump straight into the action rather than spend the early chapters having to set up what the story will be.

“You will win it, most assuredly.”

Another vicious smile. “One way or another, I will.”

As I mentioned in my last review, though I have no problem with it personally, I understand that some people may not like the story being told from so many different points of view. If you didn’t like that in the first 2 books, then it will probably feel even worse in this one as even Norra’s team are split more than before, which could potentially lead to some people struggling to keep track with everyone’s stories.

In terms of the plot, Rax’s mission and the reasoning behind it seems a little odd (I don’t want to go into specifics too much as I don’t want to spoil the plot), while Sloane and Norra’s respective hunts for revenge are fully understandable given everything they have gone through during the books. While Temmin and Sinjir’s story could very easily end up feeling like a series of side quests, I think that Wendig does a good job of making clear why these missions are necessary and why the pair will devote time to them.

“Norra Wexley,” Sloane says. “You and me, once again. At the end of things.”

Something else that I think the book does really well is mesh in the existing characters with the main characters from this story. Han takes more of a back seat compared to Life Debt, but I think that he, Leia, Wedge, Ackbar and Mon Mothma are used very well throughout the book in ways that feel natural to everything going on around them, while I also really like the cameo we get from a Prequel-era character in one of the interludes and think that this is a great end to their story.

What is very noticeable in this book is the way that Wendig hints towards some potential stories but in a vague enough way that you can interpret what he is writing in multiple ways. Most noticeable in this one was the mention of a child whose description instantly makes you think that this could be Phasma, however it is not clearly stated to be the case so does not actually conflict with any later canon stories (Delilah Dawson’s Phasma now gives the story of how she joins the First Order). I quite like this as we are not likely to get an origin for everyone and everything in canon, so this allows us to develop our own headcanon based off the information provided, while also allows a writer – perhaps Chuck himself – to have a starting point for the story of some other characters they may want to look at.

“He said the day would come. ‘Bounties on the bounty hunters.’ Seems today is that day, hm?”

If you’ve read the first 2 books then you might as well finish the trilogy unless you really disliked them. To me, this was a great story and a really good trilogy for people who are fans of the larger galactic stories and a good way to continue the story of the Civil War, while this story also gives a great perspective to the Battle of Jakku, which led to the wreckages seen in The Force Awakens.