Welcome to Book Reviews. In this series I will look to review any canon books that come out in the Star Wars galaxy. I am no expert in book critic or expert in writing (as you may be able to tell), so this is very much from a fan’s point of view. I will generally try to give a quick idea of what the story is about but avoid any spoilers. In each review, I will also try to point out a few “Moments in Canon” – moments that link into the wider canon and references to other canon stories – and also give my opinion if it is worth reading. Today I will be looking at Chuck Wendig’s Aftermath. 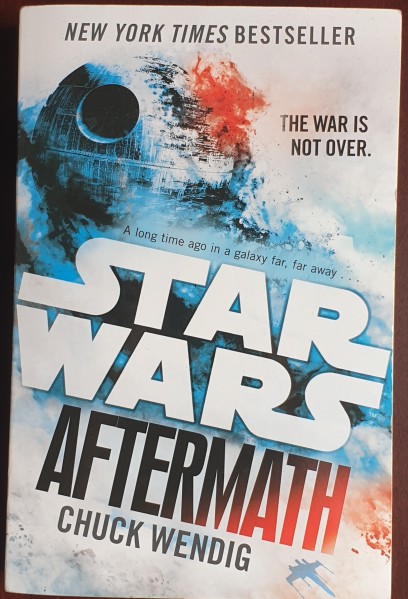 Aftermath is the first of a trilogy of books written by Chuck Wendig as part of the early phase following the canon reboot. For a number of years, these were the only novels in the new canon that were part of a series as opposed to a one-off story.

Set shortly after Return of the Jedi, Aftermath tells the story of how the war between the Rebellion and the Empire continued beyond the Battle of Endor. Grand Admiral Rae Sloane is working to bring together separate parts of the remaining Imperials at the Outer Rim planet Akiva, but her work is hampered by the arrival of Wedge Antilles and Norra Wexley, who is returning to Akiva to find her son Temmin.

Our rebellion is over. But the war… the war is just beginning.

The story is shown from a number of different points of view: Norra, Temmin and Sloane are all regular points of view, along with bounty hunter Jas Emari and former Imperial Sinjir Rath Velus, while there are also a number of other characters who give their viewpoints, including Wedge, Ackbar and New Republic commando Jom Barell.

There are also a number of interludes throughout the story that are not directly related to the main plot but help to show the state of the galaxy from a number of other points of view.

The Empire isn’t gone. Not yet.

It’s waiting to strike again. Of that he’s quite sure.

Compared to a number of stories in canon, Aftermath does not focus on just 1 or 2 main characters, but instead brings a whole host of characters in more of an ensemble role. I really like how each of the characters has their own distinct personality, but it does not feel like these personalities are artificially added to differentiate them, but instead a culmination in how their lives have gone. Norra has chosen duty above all and now has to find the way to adapt and become a mother again, Temmin is understandably hostile towards a mother who abandoned him and has now learned to look after himself. Jas is matter-of-fact and looking to get a job done in order to get paid and is hesitant to rely on anyone but herself, while Sinjir has turned to alcohol after the events of Endor left him questioning what he believed in. Sloane is now vastly more experienced and high-ranking than in her original appearance in A New Dawn, but finds herself having to deal with a number of individuals who are in the way of her and her plans for a united Empire to combat the New Republic. While the characters may not feel fully developed, that is clearly to leave space for them to grow in the sequels and also due to the main story being set over just a couple of days, but I feel that there is enough there to start finding characters that you enjoy and look forward to reading more about. The characters who join together form what is clearly an unlikely alliance due more to necessity and convenience than having the same ideals. With so many new characters, I do enjoy how Wendig will then bring in familiar faces like Ackbar and Wedge to help remind us who is on the right side.

“I PERFORMED VIOLENCE,” the droid warbles. Jas wonders if that’s pride she hears in the thing’s discordant voice. “ROGER-ROGER.”

In terms of the plot, I really like how the story develops. Tactically, it makes sense for her to try to unite the remnants of the Empire to fight back against the New Republic, but comes under pressure from other leaders who want control for their own selfish needs and is further hampered by developments courtesy of Wedge’s unexpected arrival in the system. The crew that develops to go against the Empire comes together for understandable reasons and I really like the way that their resistance develops throughout the novel, alongside the New Republic’s own increasing efforts in Akiva when they don’t hear from Wedge. It also doesn’t feel odd that the heroes of the Rebellion are not involved in this story as it was not a planned battle that required the entire Rebellion to muster, but rather a quick reaction to a clear threat, while the interludes give some clues as to what some of our favourite heroes are up to.

Chuck Wendig has a very interesting writing style in this book (throughout the whole trilogy in fact) in that he writes in the third person but writes it in a way that makes you feel like you are experiencing everything through the characters’ eyes as it happens, allowing him to seamlessly add in the characters thoughts in the moment. While it is different from what I was used to and it did catch me out a little initially, I found that I was much more on board with this than I was Kevin Hearne’s use of the first person in Heir to the Jedi.

All I will say for now is that I love a large number of the characters and really enjoyed the story.