Welcome to Book Reviews. In this series I will look to review any canon books that come out in the Star Wars galaxy. I am no expert in book critic or expert in writing (as you may be able to tell), so this is very much from a fan’s point of view. I will generally try to give a quick idea of what the story is about but avoid any spoilers. In each review, I will also try to point out a few “Moments in Canon” – moments that link into the wider canon and references to other canon stories – and also give my opinion if it is worth reading. Today I will be looking at Claudia Gray’s Leia, Princess of Alderaan.

Having already wrote Lost Stars and the Leia-centric novel Bloodline, this was Gray’s third novel in Star Wars canon and part of the “Journey to The Last Jedi” media.

Soon neither Captain Antilles nor her parents would doubt what she was capable of.

Set about 3 years before the Original Trilogy, Leia, Princess of Alderaan shows Leia going from a young girl to the senator and Rebel that we first saw her as. The novel is from Leia’s point of view as she begins to undertake tasks as part of her journey to taking the throne of Alderaan, whilst also increasing her political impact on the galaxy and meeting new colleagues who will play important parts of her life, including a future friend in the Resistance and also her first real love and also dealing with finding out a secret that her parents have been hiding from her…

What do you do when you’re a sixteen-year-old girl who knows her world is about to end?

I have been a big fan of Claudia Gray’s novels in the Star Wars canon and this was no exception! She is wonderful at writing characters in general but more importantly she is doing a fantastic job of writing one of the most famous and most loved characters in the entire saga! At 16 years old, Gray’s Leia has the right level of naïveté that would be expected of a girl her age, but this also blends wonderfully with a maturity born of her royal position and the duties that it entails. There is also enough of a headstrong, stubborn streak that we can identify with the attitude she shows during the films.

Her parents Bail and Breha Organa are clearly loving parents going through a tough time as they try to fight back against the Empire but without endangering their people and – even more important – their adopted daughter, while fellow Alderaanian Kier Domadi also feels natural as a person in a similar position to Leia, save that he will prioritise the safety of Alderaan over that of the rest of the galaxy. Mon Mothma has some impact on this story and the early ties between her and Leia (that will blossom into a strong friendship as part of the Rebel Alliance) are set up well without feeling like she is getting in the way of her parents.

Politics involved its own kind of battles, and Leia discovered early on that she liked a good fight.

Probably the character who felt strangest was that of Amilyn Holdo, who in this novel feels more akin to Luna Lovegood from the Harry Potter franchise than the character played by Laura Dern in The Last Jedi. I have heard though that the initial film scripts did have Holdo being more like this character and as there is a gap of over 30 years between the novel and the film I can put the change in character down to what she has been through over the years.

I really enjoyed the story and how we see Leia developing into the character we first meet in A New Hope. We see her not being spoon-fed all the information but acting on her instincts and discovering the information on her own. The way her parents try to hide their involvement in the Rebellion from her and then try to keep her from getting involved is fully in line with what would be expected of parents in that position, while even the romance feels like it develops naturally.

I really enjoy Gray’s writing style and think that she does a great job making her books accessible to all ages. I would usually not think of picking up something considered a young-adult novel but with Gray’s stories I couldn’t imagine not reading them! There is personal growth, love, intrigue and, most importantly, stakes not just for Leia but for everyone she cares about.

“I’m not upset,” Leia said, and it was true. Instead she was furious. She’d been tricked into doing the Empire’s dirty work for them.

Definitely! Don’t be fooled by the young-adult tag, Claudia Gray’s novels are among the best in Star Wars canon. The characters and story work so well together and while the main premise may not sound too exciting, the way the story progresses can’t help draw the reader in.

Every time I hear Claudia Gray is writing a new story I get super excited. I can’t wait to read her next novel – Master and Apprentice! Gray gets the character of Leia so well, I think she has to be the go-to writer for Leia-centric novels going forwards. 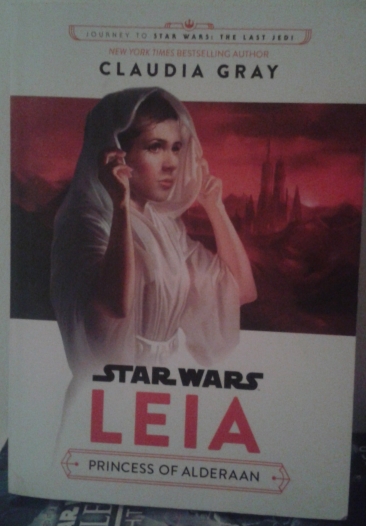 Have you read Leia, Princess of Alderaan? What were your thoughts on it? Thanks for reading and May the Force be with you…