Welcome to Film Reviews. In this series I will look to review any new films that come out in the Star Wars galaxy. I am no expert in films or film critic, so this is very much from a fan’s point of view. I will generally look to do 2 reviews: one with and one without spoilers. In each review, I will also try to point out a few “Moments in Canon” – moments that link into other films and canon media.

Today I will be giving my initial spoiler-free impressions of Solo: A Star Wars Story. I saw this for the first time earlier today so my opinion may change after multiple viewings, so I also plan to do a further spoiler review in about a week once I have had a chance to see it again.

One of the early anthology films announced, the film was initially to be directed by Phil Lord and Christopher Miller, however they left the project late in principle photography due to creative differences and replaced by Ron Howard.

The film gives the backstory to Han Solo and shows how he became the scoundrel we know from the Original Trilogy, as well as seeing his initial meetings with Chewbacca, Lando and a certain fan-favourite ship. Han joins up with a group of rogues in an attempt to get the credits required to go back to Corellia to find the girl he loves. The majority of the film is set approximately 10 years before A New Hope with the opening section of the film approximately 3 years earlier. 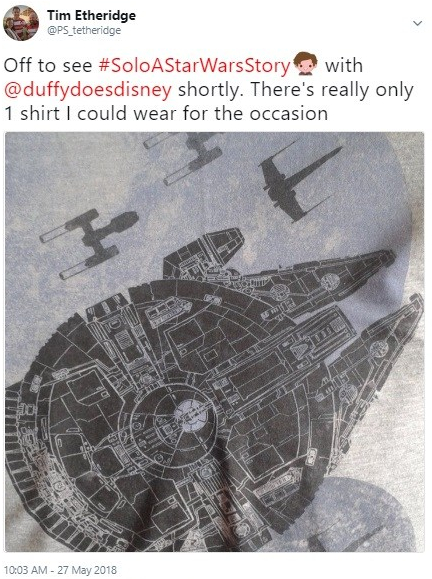 I’ve said this a number of times about the films in the Disney era, but once again it needs to be said: the film looks wonderful! Different planets and ships are very distinct from the industrial Corellia to the muds of Mimban. One of the early shots in the film saw the camera pan up to show a Star Destroyer under construction and it looked fantastic. The film really had a Western feel to it with a number of shots having the camera set behind Han but showing from the waist down almost to focus on his holster.

Much like the other Star Wars Story, Rogue One, Solo does not go with the classic opening crawl, however we did still get some background exposition onscreen before the action, which felt a bit odd but helped ease people into a new environment compared to the cold opening of Rogue One.

In terms of the music, I’ll be honest and say that nothing is immediately sticking in my mind. John Powell included a number of throwbacks to the earlier films, with the “Rebel Fanfare”, “Death Star Motif”, “The Asteroid Field” and “TIE Fighter Attack” all being featured throughout the score in ways that fit. However, beyond that I will have to see the film again to see if anything else sticks with me. I was not immediately a fan of Michael Giacchino’s score for Rogue One and now really enjoy it, so it will hopefully grow on me.

Ahead of the film, I was worried that I would not be able to buy Alden Ehrenreich and Donald Glover as Han and Lando respectively. Watching the trailers made me feel more comfortable and watching the movie I was completely sold. Neither of them were doing an impression of Harrison Ford or Billy Dee Williams and were instead giving their own takes on the characters, and in my eyes it worked wonderfully. I would argue that often the moments that didn’t feel right for the character were more down to the scripting rather than the acting, as there were a number of actions from Ehrenreich especially that really reminded me of Ford’s Han Solo. His interactions with Chewbacca, played by Joonas Suotamo who has now taken over the role fully from Peter Mayhew, were wonderful and really reminiscent of their banter from previous films. Woody Harrelson’s Tobias Beckett worked well as a mentor figure for Han and I would love to see him appear in something else in the future. I enjoyed Emilia Clarke as Qi’ra and thought she did a good job, however I think that sometimes she suffered as a result of the script, much like in Terminator Genisys. Dryden Vos was played wonderfully by Paul Bettany, who replaced Michael K. Williams for scheduling reasons for the re-shoots, and I wish that he had been in the film more. Unfortunately, I was not won over by L3-37, played by Phoebe Waller-Bridge, and felt that the character was a poor attempt to recreate the enjoyment of K-2SO, yet I did enjoy the effect she had on the Kessel sequences and some of the reactions of some other characters towards her.

As for the story itself, I will discuss more in my spoiler review so that I can give my honest views, but I will say now that I was disappointed with some parts after having herd that this was meant to be one of the best Star Wars scripts ever. I was however happy that the majority of the film sticks to the criminal underworld and the Empire wasn’t the main antagonist in the movie and more another party on the side during some events.

I recently put together my ranking of the 10 previous movies in canon. After one viewing of Solo, I would currently put this film at number 5 on my list, though it was very close to making it to number 4 as I agree with the suggestion that while The Last Jedi is a better movie, Solo feels more like a Star Wars movie

I will hold off with my moments in canon for the spoiler review considering some link heavily to one of the film’s largest reveals.

What were your thoughts on Solo: A Star Wars Story? Where would you rank it on a list of your favourite Star Wars films? Let me know in the comments but please try to keep spoiler-free. Thanks for reading and May the Force be with you…