Welcome to Book Reviews. In this series I will look to review any canon books that come out in the Star Wars galaxy. I am no expert in book critic or expert in writing (as you may be able to tell from this blog), so this is very much from a fan’s point of view. I will generally try to give a quick idea of what the story is about but avoid any spoilers. In each review, I will also try to point out a few “Moments in Canon” – moments that link into the wider canon like easter eggs or references to other canon stories – and also give my opinion if it is worth reading.

When The Clone Wars was cancelled with only about half of the 6th season completed, a number of story arcs were released in different formats: some as unfinished episodes, one as a comic book and also the novel Dark Disciple. The Dark Disciple story arc was due to be 8 episodes, all of which were adapted into Christie Golden’s novel.

Following a devastating Republic loss, the Jedi Council set Quinlan Vos the task of assassinating Count Dooku. At their instruction, he attempts to bring in Dooku’s former apprentice Asajj Ventress to help him in his task. As they continue with their appointed task, Vos must reach for power he would never usually try to use and his loyalty to the Jedi Order will be tested to the limit.

“I don’t think Moregi has left the planet. I might know where he is.”

She eyed him skeptically. “Really,” she said. “And how would you know that?”

“Well,” Vos said, “I only share that information with partners.”

The majority of the story is from the perspective of Vos and Ventress, with Obi-Wan’s viewpoint appearing regularly throughout the book, as well as some sections from the viewpoint of other less influential characters.

I was a big fan of The Clone Wars so to have the series continued even in this format was wonderful. Christie Golden does such a good job of writing he characters that they really do feel the same in the novel as in the show, when I first read the book I could hear James Arnold Taylor in my head when I was reading Obi-Wan’s dialogue.

Vos imagined that just the venom in her words would have cowed an ordinary man. Fortunately, he wasn’t one.

While it still feels like part of The Clone Wars, and it is nice to have the familiarity of Obi-Wan and Anakin at times, it also feels great to have the majority of the novel from perspectives that we rarely saw in the show, as Ventress and Vos were usually side characters as opposed to being the main protagonist. The characters were well presented in the show, but I feel that Golden’s writing really helps to give them depth and it is great to watch their emotional journeys throughout the story.

Anyone who knows me will know that romance is not my strong suit or something that really interests me too much in novels, but here it is done well as their attraction grows over time from a physical appreciation to something emotionally deep, while not compromising either character. Vos not being your everyday Jedi helps as you realise that he is someone who would be willing to go against his vows if he felt it was right, while Ventress’ emotional attachment grow over time in a way that feels natural rather than conveniently appearing.

Ventress realized that it was the Force, but it had never felt like this. And it was giving her a gift.

As to the Jedi Council’s decision to assassinate Dooku, it helps to show just how far the Order has fallen that they would consider this, while again it is written so well with Windu suggesting it and Obi-Wan opposing the idea, while Yoda and the other masters appear to agree with Windu due to seeing no other alternative.

I don’t want to give too much away as to what happens as the story progresses, but I did not see the twists and turns coming as things unfold. I also feel that the ending of the story works really well and while I think that a couple of paragraphs could have been expanded on further just after the final showdown with Dooku, I can understand that the use of Vos’ perspective when he is in a bad state makes this a minor personal gripe as opposed to a real issue.

If you enjoyed The Clone Wars then I would recommend it, especially if you enjoyed the characters of Ventress and Vos. Do not be put off by the romance in this book, though it plays an important role in the story I would not consider it a true romance story, rather a Star Wars story with a romance at the heart of it, similar to The Empire Strikes Back or Attack of the Clones (and I mean that in a good way). 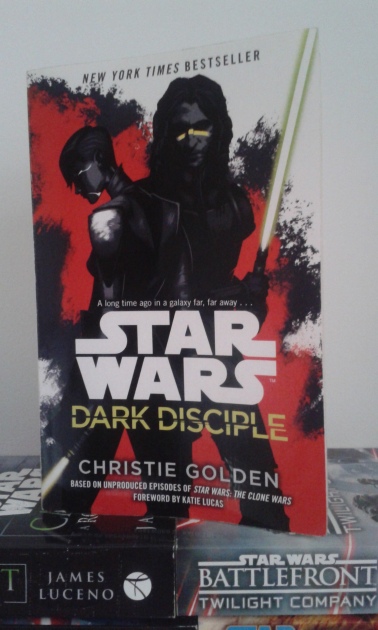 With there still being a limited amount of canon content based in the Prequel Trilogy Era, the main links that I picked up on were references to events in The Clone Wars:

Have you read Dark Disciple? What did you think of it? Sound off in the comments. Thanks for reading and May the Force be with you…