Welcome to Book Reviews. In this series I will look to review any canon books that come out in the Star Wars galaxy. I am no expert in book critic or expert in writing (as you may be able to tell from this blog), so this is very much from a fan’s point of view. I will generally try to give a quick idea of what the story is about but avoid any spoilers. In each review, I will also try to point out a few “Moments in Canon” – moments that link into the wider canon like easter eggs or references to other canon stories – and also give my opinion if it is worth reading.

Thrawn is Timothy Zahn’s first novel of the new ‘Disney Canon’. When it was announced at Star Wars Celebration 2016 that the titular character of Grand Admiral Thrawn would be appearing in Star Wars Rebels it was mentioned how though he was appearing at a slightly different time than in Zahn’s original (now Legends) novels, the character would still be very similar. So it was no surprise that a canon backstory for Thrawn was also being penned by Zahn.

Thrawn follows 3 main points of view: Thrawn himself, an Imperial cadet called Eli Vanto whose career becomes linked with Thrawn soon after meeting and Arihnda Pryce, who we have seen in seasons 3 and 4 or Rebels.

The story is spread over a number of years and works as a prequel to the Thrawn’s appearance in Rebels, charting the character’s rise through the Imperial ranks after having been found exiled on an uncharted world in Wild Space. Thrawn and Vanto repeatedly butt heads with the elitism and racism of members of the Imperial hierarchy whilst also pursuing a series of leads that all appear to link back to the same adversary, Nightswan. Meanwhile, Pryce leaves her parent’s mine on Lothal to move to Coruscant, where the greed and corruption helps mould her into the Imperial Governor we have seen in the TV series.

“I am not merely a gift. I am also a resource. One you have never seen the like of before, and may never see again. You would do well to utilize me.”

Having not previously read many Legends books, I was not as familiar with Thrawn as many established fans, but I had read enough about him to be super excited when he was revealed in the trailer for season 3 of Rebels. I absolutely loved the character in the show and as a result couldn’t wait to get my hands on the novel. Safe to say, the novel did not disappoint. With Zahn writing this book and the Thrawn from the show based off his character from Legends, the way that he speaks and acts in the book was immediately familiar to me from having watched Rebels and I couldn’t help but hear Lars Mikkelsen’s voice in my mind as I was reading the book.

I have previously described the character of Thrawn as being similar to Sherlock Holmes and that feeling is amplified in this book. The character of Eli Vanto is similar to John Watson in the way that he accompanies the genius and aids Thrawn, whilst also having the hidden links explained to him, but also having the intelligence to work out much of it for himself and also being one of the few people who can generally understand Thrawn’s thoughts and motives. The Sherlock comparisons can continue with the character of Nightswan, the main antagonist of the novel who is probably one of the closest matches to Thrawn’s intelligence and understanding. Many times Thrawn is the only one able to see the links to Nightswan, which often makes it appear as if he has an obsession with his nemesis.

I really enjoy the way that the racism of the Empire is dealt with in this novel, with the explanation being given that non-humans are often looked down upon in the Empire due to the Separatists during the Clone Wars often being from non-human species. The book doesn’t stop here though and by making Eli Vanto from Wild Space, it allows us to see the elitism of Imperials that have come from the Core Worlds, in much the same way that the upper class can be seen to look down on the working class in the real world.

While I really enjoyed Thrawn and Eli’s points of view, I was not so enamoured with Pryce’s sections. It was nothing against the writing, but I found that it lacked the intrigue of Thrawn and Eli’s shared storyline. I did also find it a little jarring to see Ryder Azadi painted in a way that made him seem such a bad person, which didn’t seem to fit with his character in Rebels, but at the same time I can understand that his experiences after Pryce usurps him as Governor of Lothal could conceivably cause this change in personality.

I have seen some people call this novel too slow paced, but I did not feel that myself as Thrawn is a methodical individual and I think the pace reflected that. I let my work colleague borrow the book the day I finished reading it and I have never seen him get through a Star Wars novel so quickly, he was hooked! We don’t get answers to everything in this book – we are repeatedly teased that Thrawn did something memorable during the Clone Wars that Anakin reported to Palpatine – but I am happy with this as it shows that this was likely not intended to be a stand-alone book, which has so far been the case for most of the books in the new canon. A sequel, Thrawn: Alliances is due for release in July and as it features Thrawn with Vader, I expect that we will find out more about this incident from the Clone Wars during this novel.

If you enjoyed Thrawn in Rebels, then I definitely think this is worth a read. I would say that if you haven’t read Rebels it is still a good book to read and I would be comfortable including it in the top 5 canon novels that I have currently read, possibly even my top 3. 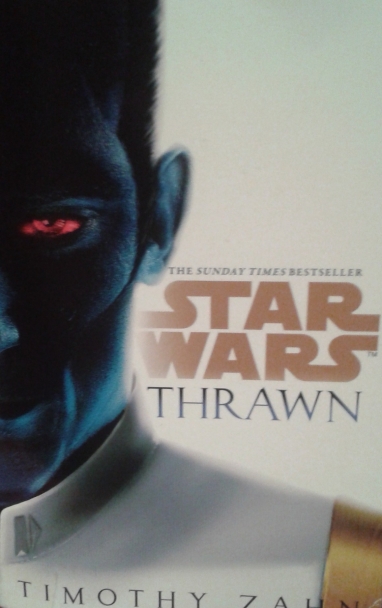 If you have read Thrawn, what were your thoughts on this novel? Where would it rank in the list of canon books you’ve read? How much are you looking forward to Thrawn: Alliances? Thanks for reading and May the Force be with you…

One thought on “Book Review: Thrawn”